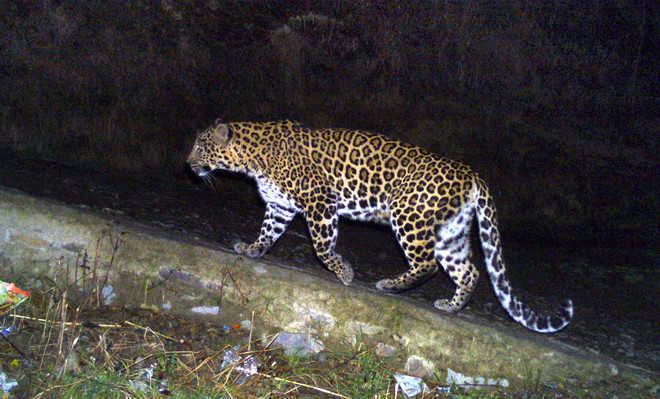 A leopard prowling in villages around Kasauli has created a visible scare among the residents.

A leopard prowling in villages around Kasauli has created a visible scare among the residents.

Though no loss of life or attack on any domestic animal has been reported, several videos of a leopard prowling in the villages have gone viral. Residents as well as visitors in hotels, who prefer to take a stroll in the evenings, are now shutting themselves up after sunset.

Solan Divisional Forest Officer Shreshtanand said awareness was being created at places where the leopard had been cited, to avert any mishap. “Residents have been advised not to venture out in the evenings after dark and ensure that children do not venture out alone. They have been directed to take measures, like bursting crackers and lighting a fire, if a leopard is cited in any village, to keep it at bay.”

A cage has been erected at Sujji village in Kasauli subdivision, from where reports of a leopard having been cited had come in. Reports of a leopard roaming around have also been received from Nauni village in Solan, though it had not attacked any animal or human. Posters to create awareness among villagers have been put up by the forest staff at places like Jabli village on the Kalka-Shimla highway. — TNS