950 to take degrees from colleges next year | Sanctioned posts of doctor 2,400 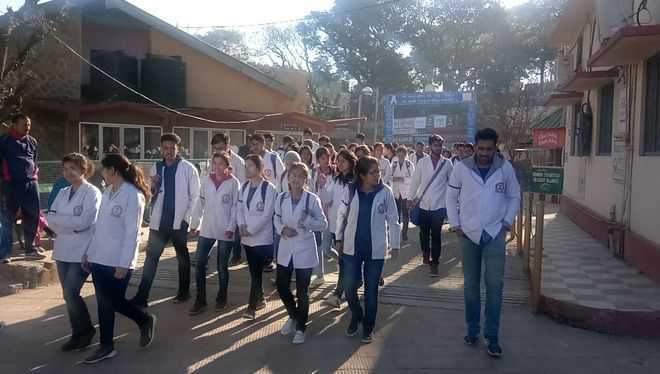 With the increased number of seats in the MBBS course in medical colleges of the state and the limited intake by the Health Department, the passouts are facing an uncertain future.

Their concerns and demands

The students, talking to The Tribune, said the number of seats had more than doubled in the last few years but the employment opportunities for doctors have not increased proportionately. Most jobs for MBBS passouts are in the government sector as there are a few private hospitals in the state.

Earlier, there used to be just two medical colleges, the IGMC-Shimla and Tanda medical college in Kangra district. Only 200 MBBS students used to pass out each year and most of them got absorbed in government hospitals or used to join PG courses. Now, Himachal has seven medical colleges and the number of MBBS seats is about 950.

The students have written to Chief Minister Jai Ram Thakur that there are 2,400 cadre posts of medical officer. In 2021-22, 450 MBBS students will pass out from various medical colleges in the state. The number of MBBS passouts from the medical colleges is likely to increase to 950 per annum from next academic year.

They have further urged the CM that as per the WHO guidelines, there should be at least one doctor for a population of 1,000. The number of posts of medical officer should be increased to 7,400.

They have also suggested him the retirement age of doctors, which is between 62 and 65 years, should be reduced to 58 years.

The student’s central association of Tanda medical college has also written to the government regarding their concerns over interviews for the posts of medical officer. In a letter to the CM, they have stated that the interviews took place when the passouts complete the internship. However, this year due to the pandemic, the internships are finishing at different time.

The students have urged the government that interviews for recruitment of medical officers should be held the same time when internships of all MBBS passouts are complete.