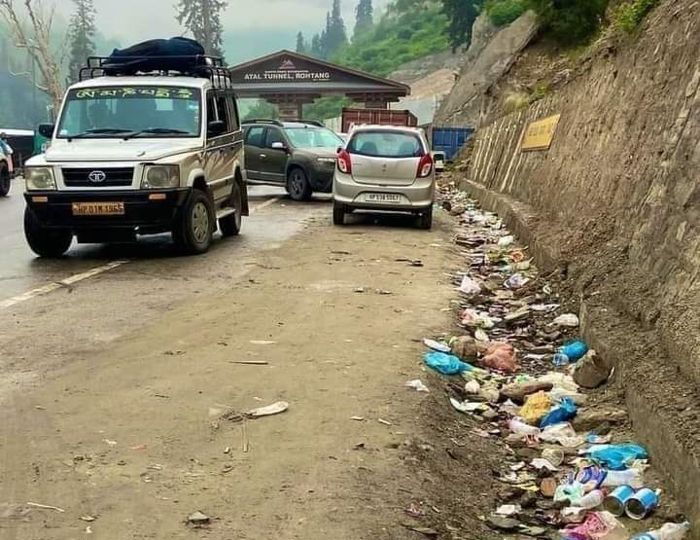 Garbage littered near the south portal of Atal Tunnel at Dhundi. Tribune Photo

Littering by tourists near Atal Tunnel has gone unchecked as heaps of garbage can be seen on the roadside of the tunnel’s south portal near Manali. Besides being an eyesore, the waste is polluting the eco-fragile region and will be a health hazard, if this goes unabated.

The opening of the tunnel has resulted in a huge influx of tourists, with the threat of environmental degradation looming large.

Atal Tunnel has emerged as a famous tourist destination. Adequate infrastructure should be developed there so that the ecology of the area is not harmed. Strict vigil should be maintained and violators should be penalised. —Abhishek Rai, An environmentalist

Environmentalists have expressed concern and stated that visitors litter at various spots, threatening the ecology of the area. Due to lack of infrastructure to cope with the increasing number of visitors, environment of the region is being degraded.

Abhishek Rai, an environmentalist, has said there is no adequate arrangement of dustbins near the tunnel, adding that there is a dire need for separate washrooms for men and women.

He said: “Atal Tunnel has emerged as a famous tourist destination. Adequate infrastructure should be developed there so that the ecology of the area is not harmed. Strict vigil should be maintained and violators should be penalised.”

A large number of tourists have started visiting the Lahaul valley after the opening of the tunnel. Residents of Sissu panchayat have put up warning boards at various places to avoid littering by visitors and imposing a fine of Rs 1,000 on the offenders.

To keep the area clean, the youth of the Adventure Sports and Tourism Society are carrying out cleanliness drives in Sissu, but the influx of tourists is very heavy and it is not possible for the locals to maintain a thorough vigil.

The pristine valley of Lahaul has also become a picnic spot for the locals as well.

Some panchayats in Lahaul have put up hoardings at multiple places to make tourists aware about keeping the area clean. Despite that, tourists do not refrain from littering.

A resident said Atal Tunnel was attracting a lot of tourists and locals of Himachal as well. “The government should ensure facilities at both portals. It should also regulate the number of visitors to the Lahaul valley according to the capacity of the region,” he said.