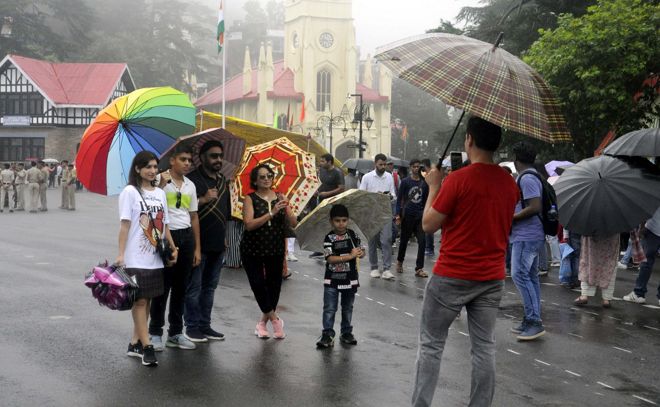 Tourists enjoy the pleasant weather at The Ridge in Shimla on Sunday. Photo: Lalit Kumar

Tourists are making a beeline for the queen of hills, Shimla, in spite of frequent landslides on the Shimla–Parwanoo Highway. With the long I-Day weekend going on, the hotels in the city have recorded 80-90 per cent occupancy.

“It is a big relief from the sultry heat of plains and we are enjoying the rain and cold weather. The fog is presenting a mesmerising view of the hills, ‘’ said Mohit and Anu, a tourist couple from Delhi.

President of the Tourism Industry Stakeholders Association MK Seth said 90 per cent rooms had been booked in premium hotels while the overall occupancy was between 80 and 90 per cent. The footfall could have been more if the roads were safer. The National Highways Authority of India should take cautionary measures and traffic should allowed only on one lane on vulnerable stretches, he added.

With the increase in tourist arrivals, traffic congestion has increase in the city. However, the widening of various roads under the Smart City project is providing some relief at major bottlenecks. A flyover from animal husbandry hospital to the road below Hotel Holiday Home would decongest the Lift area which is overburdened, Prince Kukreja, vice president of Shimla Hotel and Restaurant Association, said.

But to avoid parking hassle and the traffic, tourists are preferring to stay in home stays, resorts and bed and breakfast accommodations in the outskirts of the city.

Meanwhile, tourists in the city are staying for shorter duration. The average length of tourist stay has decreased from 3.6 days to 1.8 days. Tourist attractions in and around the city should be popularise in order to increase the stay, tourism stakeholders said.

There are several tourist places in 2-3 km radius of the city such as Chadwick Falls, Annadale Army Museum, various heritage buildings, the State Museum, the Institute of Advanced Study, Bird Park and forest tracks to Glen. A planned visit to these places can increase the tourist stay by at least one day.