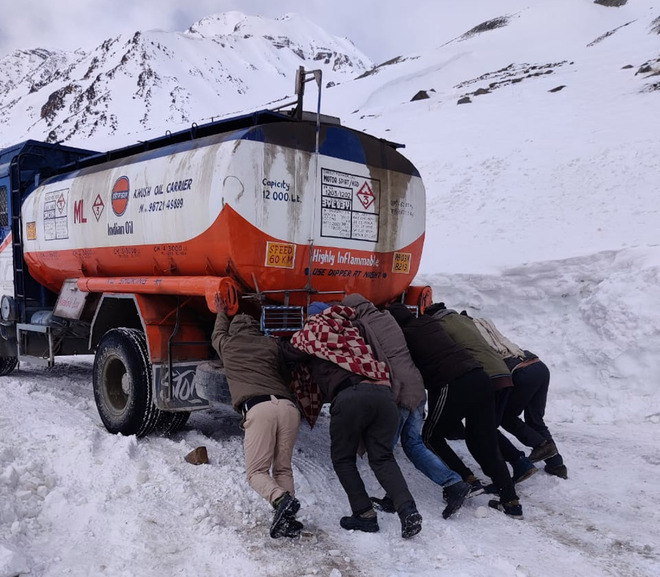 Police personnel and others push a tanker from a snow-covered road at Baralacha La on the Manali-Leh highway.

As many as 37 persons, including women and children, were rescued by the police and BRO personnel from Baralacha Pass on the Manali-Leh highway last night. These people were traveling from Leh side towards Lahaul valley, when sudden snowfall blocked the highway for traffic movement. As a result, they remained stuck near Baralacha pass for hours last night.

Police and BRO team led the rescue operation which continued till late night and all the stranded people were rescued. The BRO, in the process, restored the Manali-Leh highway for traffic movement via Baralacha Pass and around 119 light vehicles were allowed to move ahead from Darcha in tribal district Lahaul Spiti to towards Leh today.

Some vehicles had been stuck at Darcha for the last 11-12 days because of the Manali-Leh NH was blocked following heavy snowfall at Baralacha Pass on April 4.

Deputy Commissioner Lahaul Spiti Pankaj Rai told The Tribune, “After restoration of the highway, 119 light vehicles were allowed to move towards Leh from Darcha today, while around 36 vehicles crossed Sarchu towards Leh from Lahaul side.” “A team of BRO, police, ITBP and District Disaster Management has been deputed in the area to monitor the traffic and provide assistance to the people in distress. Despite freezing temperature in the region, this team is working relentlessly to help the stranded people and regulate the traffic”, said the DC.

He stated that heavy vehicles are still struck at Darcha. These will be allowed to move towards Leh from Darcha after all light vehicles move to Leh from Lahaul side.