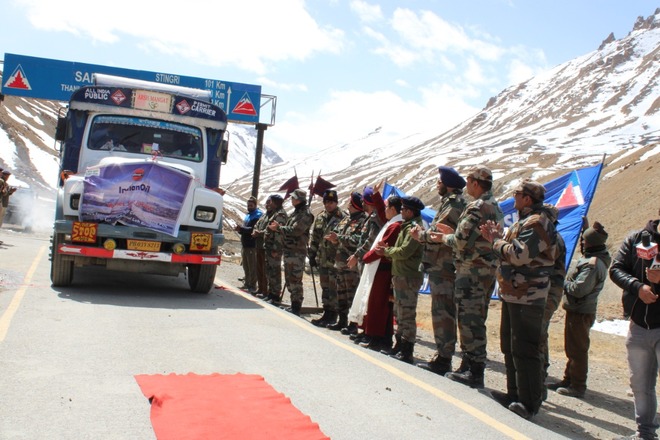 The first convoy of the IOC being flagged off at Sarchu for Leh. Tribune photo

The BRO has restored 425-km Manali-Leh highway for vehicular traffic, which will provide access to military and common civilians from the Manali side in Himachal Pradesh to Leh in the union territory of Ladakh.

The first convoy of IOC bowsers was flagged off from the Himachal side by Stanzin Chosphel, Executive Councillor, Ladakh Autonomous Hill Development Council (LAHDC), today in the presence of BRO officials to announce the opening of this highway.

The strategically important Manali–Leh highway remains closed for about six months every winter and Ladakh remains cut off from rest of the country which makes the region dependent on supplies through the aerial route.

Due to the ongoing border issue with China in Ladakh, the Union government had this year asked the BRO to restore this highway earlier as soon as possible.

As a result, the BRO had started snow clearance operation on the road stretch between Manali and Leh in mid-February with a strategy to simultaneously commence snow clearance on four important passes along the route — Baralach La (16,047 ft), Nakeela (16,170 ft), Lachung La (16,616 ft) and Tanglang La (17,582 ft).

These passes receive 20 to 30 feet high heavy snowfall every year, which keeps the highway blocked for traffic movement for months.

BRO sources said the latest hi-tech machinery was swiftly inducted for clearing snow. BRO teams worked relentlessly day and night to provide early connectivity to Leh. The dynamics were different this year with the inauguration of Atal Tunnel as there was no necessity of opening the Rohtang Pass. This enabled complete focus on opening of Baralacha La with additional resources to restore connectivity at the earliest.

The opening of Baralacha La involved a two-pronged. The work started simultaneously from two sides — from Patsio to Baralach La and from Sarchu to Baralacha La.

After the restoration of the Manali-Leh highway, the people of Lahaul and Ladakh have conveyed their gratitude to Lt Gen Rajeev Chaudhary, VSM, DGBR, and applauded the tremendous efforts put in by BRO to restore this highway in time.