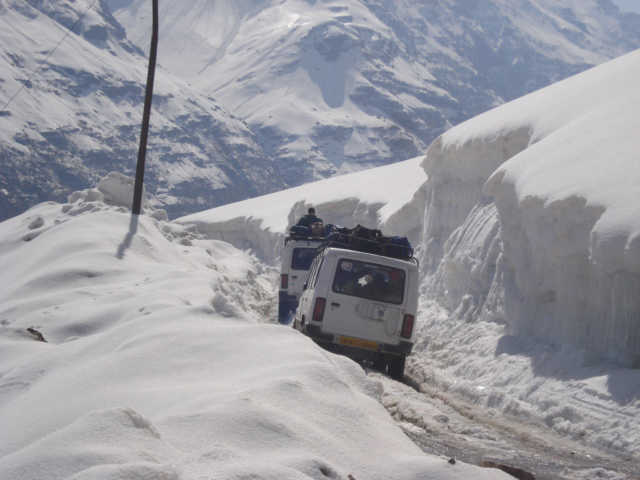 Cutting mountains of snow, the Border Roads Organisation (BRO), a wing of the Defence Ministry that maintains the strategic highways, in a historic feat has managed to link this Himachal Pradesh tourist resort with Leh in Ladakh two months ahead of schedule despite facing natural disasters like avalanches and landslides amid the coronavirus pandemic.

The 428-km Manali-Leh highway was reopened to motorists on March 28 with the completion of the snow-clearing operations, officials said on Tuesday.

The highway is strategic for the movement of the armed forces and their supplies and wares to forward areas in Ladakh region that borders both China and Pakistan.

"This time we had only one challenge i.e. that was to make the Baralacha Pass (16,020 ft) motorable after clearing the winter snow," a senior BRO official told IANS.

Earlier, there was a herculean task to make the way zooming through the Rohtang Pass (13,050 ft).

With the opening of the 9.02-km long horseshoe-shaped Atal Tunnel, the world's longest motorable tunnel, under the Rohtang Pass in the Pir Panjal range, some 30 km from here, the pass is now only the alternative gateway to Leh.

"Well ahead of the onset of snowfall in November last, we had stationed machinery and stored ration across the Baralacha Pass in Sarchu," BRO's Chief Engineer (Project Deepak) Brigadier M.S. Baghi told the media.

He said in the second week of February a team of six BRO men, comprising an engineer, trekked the Baralacha Pass by risking their lives.

"After two attempts, they managed to cross the Baralacha Pass on foot despite onset of heavy snowfall and looming threat of avalanches and snowstorms. On reaching Killing Serai, they started the snow-clearing operation from the north end of the pass," Brigadier Baghi explained.

Another team was stationed at the south end of the Baralacha Pass at Zing Zing Bar, some 130 km ahead of Manali.

While the BRO's Project Deepak is responsible for clearing snow on the Sarchu-Manali highway, Project Himank takes care of the Leh-Sarchu highway.

Sarchu is a border between Himachal Pradesh and Ladakh.

The idyllic settings of the Himalayas draw an increasing number of backpackers, especially foreigners, for adventure activities.

The Manali-Leh highway, a challenge to operate and maintain for the BRO, was reopened last year on May 18 and was closed for the traffic on December 5.

"The climatic condition on their trek was extremely harsh with continuous snowstorms amid a low oxygen environment and the minimum temperature hovering below minus 30 degrees Celsius. Since there was no shelter en route and camping was not feasibly, our men spent a night in a snow-struck truck parked on a roadside," a BRO official told IANS.

He said all six 'snow warriors', who trekked across the Baralacha Pass, were honoured by the BRO's Chief Engineer (Project Deepak) at a ceremony held at Sarchu when the highway was reopened for the motorists.

Vehicles carrying essential commodities for civilians and armed forces have been initially allowed to move towards Leh-Ladakh from Manali.

"Earlier, this route is used to open for the traffic after mid of May. This is for the first time it was opened in the end of March," said truck driver Surjit Singh, who has travelling on this Manali-Leh axis for over two decades.

Officials advised the tourists to check on general road conditions and confirm whether the high mountain passes are open.

If driving in a four-wheeler, make sure you have an extra driver, especially if you plan to drive at night. Carrying extra fuel is must.

High mountains, though beautiful, are rugged, cold and inhospitable and no place for an inexperienced or ill-equipped travellers. IANS