Day one: Lowest turnout of 25% in primary classes seen in Kinnaur 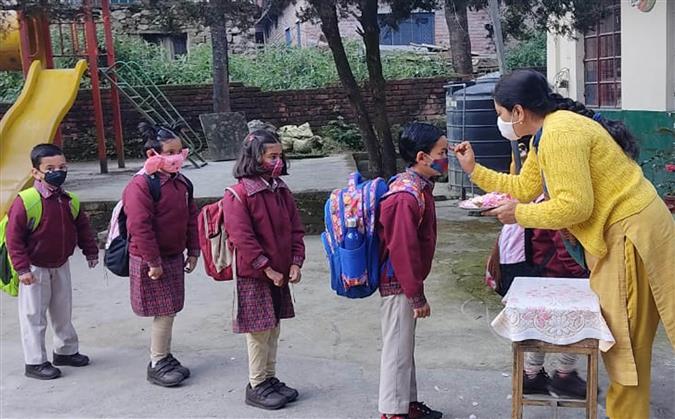 The attendance in the primary classes on the first day was encouraging and the state government decided to serve cooked hot mid-day meals in the schools from March 1, said Pankaj Lalit, Director Primary Education. He added that earlier schools were opened for a short period but the primary classes were suspended due to the sudden rise in Covid cases.

“It is relief to be back in school. Regular classroom teaching has resumed and the days of online teaching on smartphones are over,” said Rajni, a Class IV student who was elated at being among her friends again. “My mother told me to wear a mask and study well in the class,’’ said Vanshika, a Class I student of Government Primary School, Sayari. Teachers welcomed the students of the primary classes in Mandi district by putting a tilak on their foreheads.

The percentage of attendance in pre-primary classes was inconclusive as the data was awaited from nine of 12 districts. There are about 2,655 students enrolled in pre-primary classes. The summer closing schools had opened for Class IX to XII a fortnight ago. Today, all schools, including winter closing schools and primary and elementary schools, started functioning normally.

As many as 266,501 of 493,562 students (54 per cent) of Class VI to XII attend schools. The maximum number of students (88 per cent) attended schools in Lahaul and Spiti while the turnout was the lowest (22 per cent) in Kinnaur, said Amarjeet Sharma, Director, Higher Education Department. The highest attendance of 62 per cent was witnessed in Class IX and the lowest of 38.10 per cent in Class IV in the state.

The schools have prepared micro plans for calling students, while adhering to the Covid 19 norms. Elaborate instructions regarding the Covid 19 protocol have been issued to the schools and daily sanitisation of classrooms, cleaning of toilets twice a day, regular thermal scanning, wearing of proper face masks by students, teaching and non-teaching staff, and maintaining a proper physical distance will be mandatory.

There will be no morning assembly or other assemblies, co-activities or sports events that involve physical touch or gathering of students in the institutions till the situation normalises. The lunch break will be adjusted class wise in a staggered manner at different times and the safety and security of students be ensured during transportation. 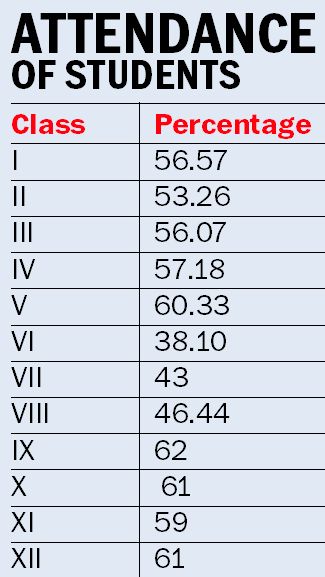