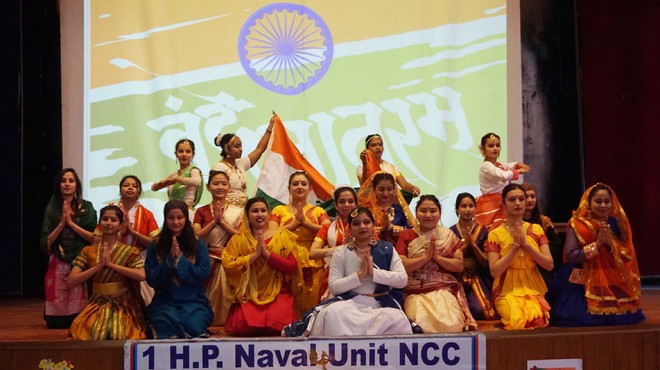 The Hindi Department of St Bede’s College celebrated Matri Bhasha Diwas on Thursday. The programme started with the ceremonial lighting of the ‘panchdeep’ followed by Ganesh Vandana. An act conveying the diversity in India was performed with students dressed in the traditional attire of various states of India. Various competitions were held in which the students participated enthusiastically. The competitions included slogan-writing, declamation and poem recitation. Shrishti Pandit stood first and Ashita Bhawta was the second in slogan-writing competition. In poem recitation, Jahnvi and Simran Kathait stood first and second, respectively, while in declamation, Kirti Sharma stood first and Aastha was second.

The Himachal Pradesh University (HPU), Shimla, has extended the last date for submission of the examination form for undergraduate classes BA/BSc/BCom and Shastri first and second year up to February 29, 2020, controller of examinations JS Negi said. The last date came to an end on February 20 and the university authorities, in the interest of students, extended it up to February 29 so that all students could fill up the examination forms. Meanwhile, Director, International Centre for Distance Education and Open Learning (ICDEOL) of the HPU, Prof Kulwant Singh Pathania, said the ICDEOL had extended the last date to take admission in UG and PG classes except BEd for the session to February 24.

The Himachal ABVP called for an ‘education bandh’ and locked the gate of Rajkiya Kanya Mahavidyalaya, preventing teachers and students from entering the college. The ABVP activists raised slogans against the Himachal Pradesh University administration for not accepting their demands. “The education sector is facing several problems and indiscriminate opening of colleges without proper staff and infrastructure is harming the interests of the students while the fee hike by ICDEOL had hit the poor students hard and in case the demands are not accepted, the ABVP will launch a statewide agitation,” said Sachin, Shimla district convener of the ABVP.

As many as 49 students of Him Academy Public School got laptops under the Srinivas Ramanujan Student Digital Yojana on Thursday. The meritorious students of the school included 22 students of Class X and 27 students of Class XII. The principal congratulated the students for their achievements and said they had proved their excellence once again. Other students were also encouraged to work hard to score good marks.

A cleanliness awareness campaign was organised under the aegis of AP Goyal Shimla University. Flagging off the drive, Secretary to Governor Rakesh Kanwar said the father of the nation, Mahatma Gandhi, had dreamt of a clean India and all citizens of India together should keep their village, street, city and neighbourhood clean. The students performed street plays, speeches, poems and Himachali Nati and highlighted to the public to the importance of cleanliness.