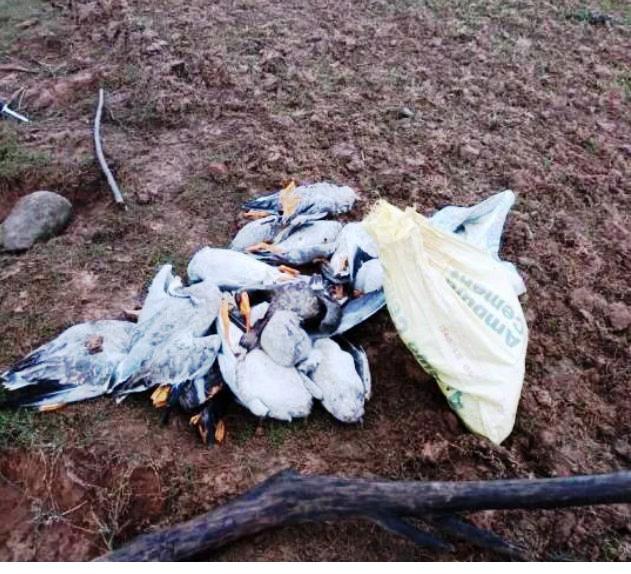 The dead birds collected and identified for disposal by Wildlife teams in the Pong Wetland area. Tribune photo

The unabated deaths of migratory birds with avian flu (H5N1) in the Pong Wetland’s Wildlife Sanctuary have touched a new high of 2,700 till Tuesday evening causing more concern to the state government authorities.

However, of the fifteen species of migratory birds falling prey to the outbreak, bar-headed goose coming from Mongolia and China is the highest.

Meanwhile, a team of scientists from Wildlife Institute of Indian, Dehradun, headed by Dr Suresh on Tuesday arrived in the Wildlife Sanctuary for taking stock of the situation and after visiting the affected Pong Wetland area, examined the dead birds.

As per the official information, the team has to submit a detailed finding report to the Government of India within the next two days.

A panic like situation is prevailing among the people living in the surroundings of Pong Wetland after rising toll of migratory birds.

Meanwhile, Rahul M Rahane, DFO Wildlife, Hamirpur, who has been camping in the Wildlife Sanctuary for the past one week, told The Tribune that following the directions of the Chief Wildlife Warden, Himachal Pradesh, all recommended measures were being compiled with for prevention of avian influenza.

“The expert opinion of veterinary officer, wildlife, is being taken for a preliminary understanding of the disease and requisite protective measures are also being taken like wearing of PPE kits, gloves and masks while dealing with dead birds,” he asserted.