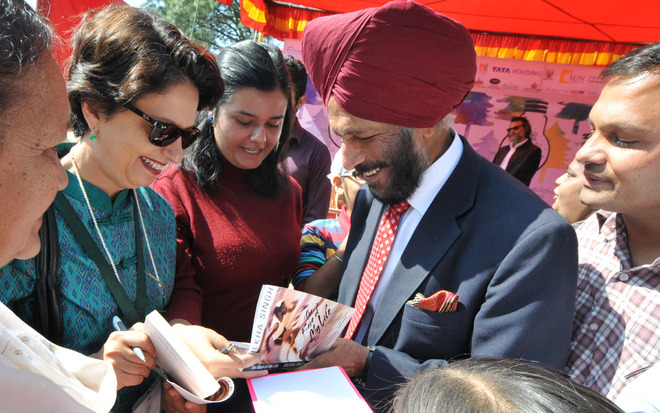 Milkha Singh signs an autograph on a book at Khushwant Singh Fest in Kasauli. FILE PHOTO

Milkha Singh, 91, who passed away at the PGI, Chandigarh, yesterday owned a house on the Kimmughat-Chakki Ka Mor road near Kasauli. The house has been named after his wife as Nirmal Niwas. It wears a deserted look and locals have neither seen Milkha Singh or his wife here in the past few years.

House named after his wife

The house perched on a hill was constructed about 15 years ago. Locals say that a caretaker looks after it and also attends to guests, who turn up once in a while, especially during the summer.

Rocky Chimni, Director, Glenview Resorts, recalls how Milkha Singh had come walking from his house till his nearby resort some years ago. He says that the passing away of the flying Sikh is a loss to the sporting world. Milka Singh visited the British-era Kasauli Club during the summer for its annual week-long celebrations. He was a member of the elite club. Locals remember him as a warm and cordial person. In 2013, he had also participated in the annual Khushwant Singh Literature Festival where a session was dedicated to his biopic “Bhaag Milkha Bhaag”.

The Padma Shri awardee in a discussion with filmmaker Rakeysh Omprakash Mehra had dwelt upon the making of “Bhaag Milkha Bhaag” and his desire to see an Indian athlete bag an Olympic gold. The jam-packed session titled “The man and the Myth” had the audience in awe, as they listened to him with rapt attention. The session was moderated by journalist Rahul Singh. Suchet Attri, who stays in the vicinity of Nirmal Niwas, says that Milkha Singh has not visited his house in the past several years.