Centre to be approached for funds: CM 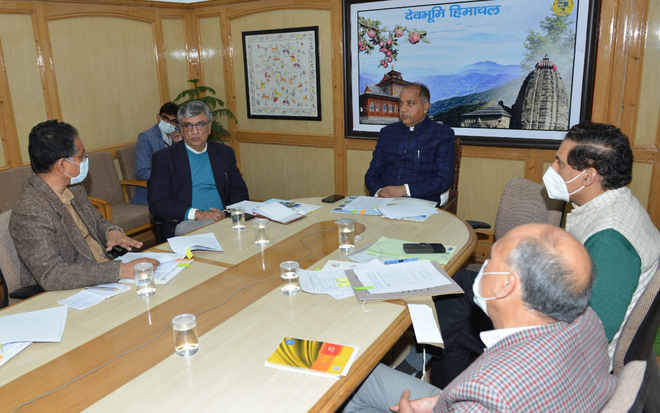 Chief Minister Jai Ram Thakur presides over a meeting in Shimla on Wednesday regarding the development of the Mandi airport.

The Airports Authority of India (AAI) has submitted a revised master plan for the setting up of a green field airport at Nagchala in Mandi along with the land required so that the ambitious project could be expedited.

Chief Minister Jai Ram Thakur said this while presiding over the meeting regarding development of Mandi airport here today. He said the runway orientation of the proposed green field airport in Mandi could be fixed and OLS charts can be prepared by the consultant.

Thakur said that the state government has got LiDAR (Light Detection and Ranging) survey done through WAPCOS Ltd. for fixing the alignment of runway as per the suggestions of the Ministry of Civil Aviation and the AII. He added that this survey was completed on July 21 and WAPCOS Ltd/ M/s Geokno India Private Limited has submitted the LiDAR survey data to the AII.

The Chief Minister said as per the site clearance given by the Ministry of Civil Aviation and master plan submitted earlier, runway of 2,100 m was planned with possible extension of 1,050 meters on southern side. “As per the aerial LiDAR survey the extended runway length of 1,050 m would be on the northern side instead of the southern side,” he said.

The Chief Minister said that with the shift in the side, the runway would be suitable for the operation of AB-320 type of aircraft. “Flights can be operated from this airport throughout the year with the help the night landing facility having a provision of

the CAT-I lighting system,” he added.

The Chief Minister said the state government would also contemplate setting up a joint venture company involving the Government of Himachal Pradesh and the AAI for developing this ambitious project. He said that this project would not only provide better air connectivity to the state and give boost to the tourism industry but would also be strategically important.

Thakur said the state government would take up the matter of funding of this project with the Union Grnment, keeping in view its strategic importance. He said that the 15th Finance Commission had also recommended Rs 1,000 crore for this mega project.