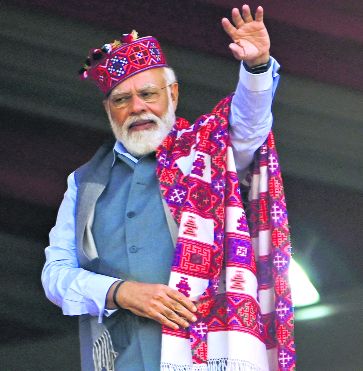 PM Narender Modi being welcomed with traditional Pahari cap and woolan shawl during a public meeting in Mandi on Monday.Photo Jai Kumar

Striking an emotional chord with the people of the state, especially Mandi, Prime Minister Narendra Modi today said he had a special connect with Himachal, which had had a very positive impact in shaping his life.

You (PM) are familiar with every nook and corner of the state and know a majority of party leaders and workers by name. Mandi is known as ‘Chhoti Kashi’ while you represent Kashi, which now stands transformed. — Jai Ram Thakur, CM

Adorning the traditional Kullu cap and Kinnauri muffler, Modi started his address in the local Mandiyali dialect much to the delight of the public. He said he was blessed to be in Chhoti Kashi.

“I share a very special emotional bond with Himachal which has had a great impact in shaping and giving direction to my life,” said the PM.

He added that he still relished the taste of Mandyali cuisine, including sepu vadi and meetha, which he savoured when he was in-charge of party affairs in the state.

He heaped praises on Chief Minister Jai Ram Thakur for steering the state on the path of development amid Covid.

“Four hydro projects worth Rs 11,581 crore will not only help generate energy, but also create jobs,” he added, HP would earn Rs 125 crore from the Sawra Kuddu project while the major portion of the income from the Renuka project would be utilised on improving facilities in the area.

The PM said it was essential to protect the environment while setting up projects. The state had set an example through organic farming. It had immense potential for pharma, food processing and agriculture, which must be developed.

Modi said the state was the land of anushsan (discipline) and of valiant soldiers. His regime had given one rank, one pension to serving and retired defence personnel. HP had immense potential for religious tourism which must be tapped. Himachal had emerged as a model hill state which had been ranked among the top in several sectors. He assured HP of all help in its march on the path of development.

Addressing the rally, Jai Ram Thakur said Himachal is blessed to have always received special love, affection and help from Modi, who considers HP his home.

“You are familiar with every nook and corner of the state and know the majority of party leaders and workers by name. Mandi is known as “Chhoti Kashi” while you represent Kashi, which now stands transformed,” said the CM.

“We are implementing the Shiv Dham project here to promote religious tourism,” he said.

“You ensured that Atal Bihari Vajpayee’s dream of constructing all-weather Atal Tunnel became a reality,” said the CM. He thanked the PM for providing AIIMS at Bilaspur, besides four medical colleges to the state.

The CM said every possible effort would be made to ensure that the BJP would repeat the government in 2022.

Addressing the gathering, Union Minister for Information and Broadcasting Anurag Thakur said Modi had given approval to the much-delayed 40 MW Renuka project. Anurag said it was Modi who had made possible the completion of Atal Tunnel and construction of roads and rail network in Himachal.