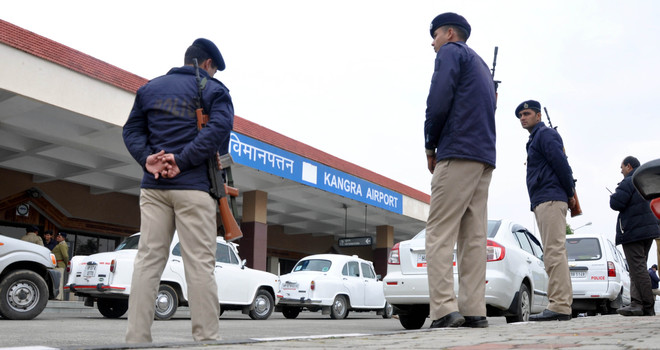 The expansion of Gaggal airport is getting embroiled in political controversy. After the state government expedited the work for acquisition of land for its expansion a handful of affected farmers have started an agitation against the move.

Some politicians are seeing a conspiracy behind the farmers agitation. BJP MP from Kangra Kishan Kapoor has alleged that a few vested interests, who were against development of the Kangra region, were behind the agitation. Airport at Gaggal is the busiest in the state and has maximum scope for expansion. If the Gaggal airport was expanded it would help in development of the entire state, Krishan Kapoor alleged.

A BJP MLA had recently issued a statement saying that expansion of Gaggal airport was not required.

Sources here told The Tribune that a tug of war has erupted within the state BJP as a section of party leaders want that the Mandi international airport should come up on priority while the other section wants that the expansion of Gaggal airport should be carried out first.

Political bickering has already affected many projects in the state, most prominent among them being the Central University Himachal Pradesh (CUHP). The permanent campus of CUHP has failed to come up even after 10 years of establishment of the institute as there were political pulls and pressures regarding the location of the campus.

The state government has expedited the work for expansion of the Gaggal airport. A three-member committee headed by Deputy Commissioner has been formed to negotiate with the farmers whose land was to be acquired for the project and was asked to submit a report soon. Deputy Commissioner Kangra Rakesh Prajapati said the case was being prepared for acquisition of about 40 hectare land for the expansion of the airport.

The sources here said that the revenue officials have estimated that an amount of about Rs 500 crores might be required to acquire 40 hectare land for expansion.

The sources here said that the state government was planning to submit a case with the Finance Commission for funds required to acquire land for expansion of the airport.

The Gaggal airport is the busiest domestic airport of the state. It receives four flights a day during peak season that ply between Delhi and Dharamsala. However, the airfares from Delhi to Dharamsala and vice versa were the highest in the country. At times the one-way air ticket from Dharamsala to Delhi costs between Rs 19,000 and Rs 21,000.

Politicians of the state have also been demanding that the airfares in the state should be subsidized at par with benefits being extended to the northeastern states and Jammu and Kashmir.

Air India has also started a flight between Chandigarh and Dharamsala for six days a week barring Sundays. Though the state government has announced heli taxi from Chandigarh to Shimla and Shimla to Dharamsala and Kullu there was a demand for a direct heli taxi service between Dharamsala and Chandigarh.