JP Nadda: No question of leadership change in Himachal : The Tribune India

JP Nadda: No question of leadership change in Himachal

'Assembly elections will be fought under CM Jai Ram Thakur' 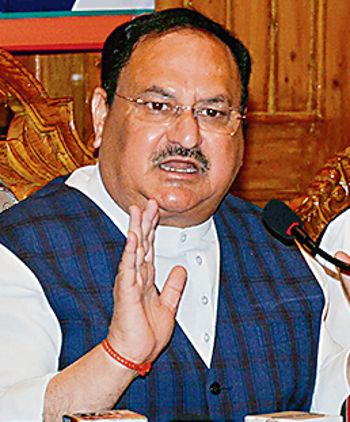 The BJP has made up its mind to contest the Himachal Assembly elections under the leadership of Chief Minister Jai Ram Thakur but the possibility of some sitting MLAs being denied ticket cannot be ruled out, as indicated by BJP chief JP Nadda here today.

Setting aside all speculations of a change in leadership in Himachal, Nadda told the media the Assembly elections would be fought under Chief Minister Jai Ram Thakur. “The BJP government is performing very well and there is no possibility of leadership change in the state,” said Nadda, also ruling out the possibility of a Cabinet reshuffle However, asked if ticket could be denied to sitting MLAs, Nadda said that was always a possibility as “we do change about 10 per cent party nominees in any election”. The statement could give sleepless nights to several leaders.

The BJP government is performing very well. I am fully satisfied with the coordination between the party and the government. —JP Nadda, BJP President

Even though talk of leadership change had been doing the rounds, Delhi Deputy CM Manish Sisodia’s claim that Union Minister Anurag Thakur would be replacing Jai Ram Thakur had further fuelled the speculation.

“I am fully satisfied and happy with the coordination between the party and the government,” Nadda said. The BJP president, here on a four-day tour of the state, virtually kickstarted the BJP campaign not just for the Assembly elections but also the Shimla Municipal Corporation poll holding marathon meetings with the party’s state core committee, legislators and councillors during the last two days.

Denying infighting, he said: “The BJP is a party with democratic ethos, unlike others where speaking one’s mind is viewed as dissidence.” On the issue of granting old pension scheme to employees, he remained non-committal. “We have to come to a conclusion which is people-friendly after taking into account every aspect,” he maintained. — TNS