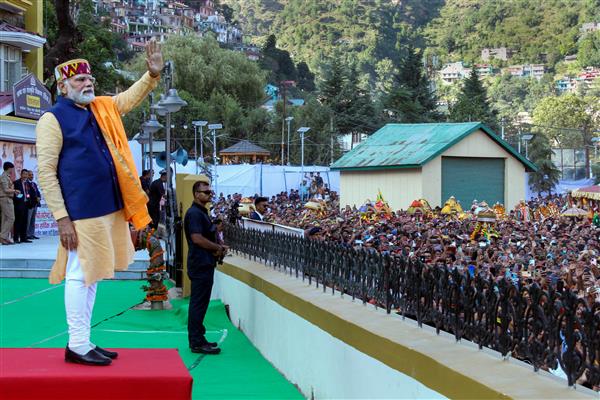 Prime Minister Narendra Modi waves at his supporters as he attends the International Kullu Dussehra festival, in Kullu, on Wednesday. PTI Photo

He arrived at the venue at 3.15 pm amid tight security arrangements. No one was allowed near the dais and chairman of the Kullu Dasehra Festival Committee and Education minister Govind Singh Thakur and HPMC Vice-Chairman Ram Singh welcomed him.

The idols of chief deity Lord Raghunath, Sita, Hanuman and other deities were brought to Dhalpur in a palanquin from their sanctum sanctorum in Sultanpur. These were then placed in a beautifully decorated wooden chariot called the Rath. Modi went to the Rath and paid obeisance to the chief deity Lord Raghunath before the Rath Yatra. The crowd was exuberated to witness the PM.

Later, the descendants of erstwhile ruler of Rupi (Kullu) valley along with the head of family Maheshwar Singh led the Rath Yatra. The Rath was pulled by thousands of devotees from the northern end of the Dhalpur ground to the camp temple of Lord Raghunath in the middle of the ground.

The palanquins of Gods and Goddesses with their bands accompanied Lord Raghunath in the Rath Yatra. Thousands of men, women and children in their traditional folk dresses, besides hundreds of foreign and domestic tourists, gathered to watch the spectacular event. There was gaiety and fervour amidst the rhythmical sound of drums and lilting of Shahnaies.

The PM was served local delicacies Siddu and Patroda. He was also given metal carved idols of Lord Rama Parivaar by the Kullu Dussehra Festival Committee.Modi left after witnessing the Rath Yatra at 4.15 pm.

Kullu Dasehra is being celebrated since mid-seventeenth century and celebrations begin on Vijaya Dashmi, the day when the festivities end in the rest of the country. Deities from various parts of Kullu district are participating in the festival this year and the invitation had been sent to 332 deities. Unlike the past two years, this year commercial activities will be carried out in the Dhalpur ground and the cultural programmes will be held in the Kala Kendra.