New order comes in the backdrop of massive protests held outside the Vidhan Sabha by anganwari workers, out-source employees and other sections of employees, both regular as well as contractual 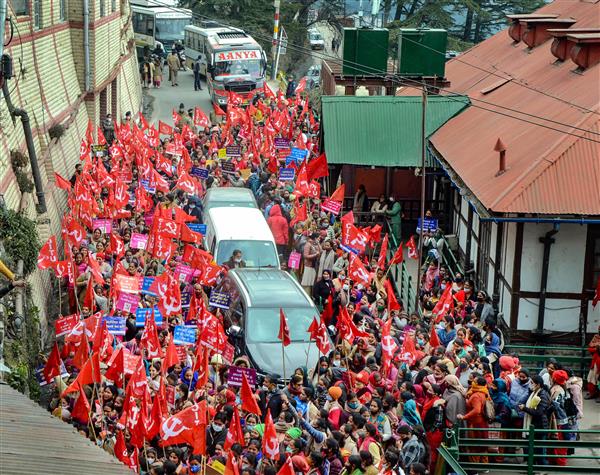 Holding strike, protest or dharna could cost their job for state government employees in Himachal Pradesh as per an order issued by the Personnel department in the backdrop of employees taking to the roads in support of their demands.

“The defaulters, indulging in unlawful activities should immediately be placed under suspension or removed from service,” the order from the Personnel department of Himachal Government issued today read. The order comes in the backdrop of massive protests and demonstrations held outside the Vidhan Sabha by Anganwari workers, out-source employees and other sections of employees, both regular as well as contractual, causing much discomfiture to the Jai Ram regime.

The employees in Himachal remain a pampered lot and every government has tried to keep them in good humour, fearing a backlash during elections from the babus. The BJP government came in for some major embarrassment when more than 200 uniformed armed cops had descended on the chief minister’s official residence to demand enhanced pay scales, some time back. The doctors of the Health department too had been observing token strike, before calling off their stir yesterday only.

CLP Leader Mukesh Agnihotri had yesterday accused Chief Minister Jai Ram Thakur of behaving in a dictatorial manner, especially the tone in which he had virtually threatened employees.  Interestingly, CM had himself remarked in the Vidhan Sabha yesterday that last time the employees gave a tough time to Congress regime so it is nothing new.

More than 2.25 lakh government employees in the hill state constitute a major chunk of the electorate and are considered instrumental in voting out any party out of power, resulting in both BJP and Congress cozying up to them, especially close to the polls.

“Such instances of protests by employees while the Vidhan Sabha session is on is nothing short of gross indiscipline, insubordination and dereliction of official duties,” the order stated. The order states that participation in such activities by Government servants is unbecoming and would constitute sufficient reason to proceed against them under Rule 11 of the Central Civil Services (Classification, Control and Appeal) Rules, 1965.

The order by the Personnel department also states that during employees protest, there is often forcible confinement of public servants as demonstrations and meetings are held within office premises during working hours for which measures like pen down strike and casual leave are being used.

Nine of the injured referred to PGIMS-Rohtak