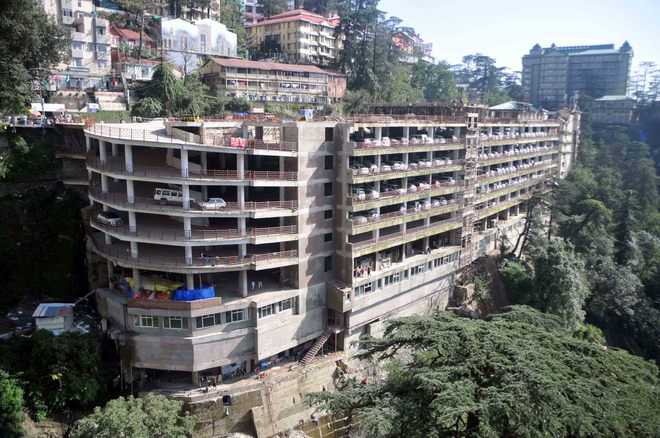 Photo for representational purpose only. Tribune/File

The National Green Tribunal has refused to permit a project of multi-level parking and other commercial activities, including a Hotel on the railway land at Shimla in Himachal Pradesh.

The tribunal rejected the submission of the petitioners that the supervisory committee, formed to evaluate construction of exceptional nature, has recommended the proposal for construction of multilevel parking which also has construction for commercial purposes/hotel.

It also refused to agree with the submission that the project is necessitated by directions of the High Court and to promote public interest in controlling traffic congestion.

"We are unable to entertain the applications. Admittedly, the project is not permissible as per the directions of this tribunal, which have attained finality. The directions of this Tribunal are in the nature of an order in rem (against a thing). So long as the same stand, no order permitting the said project can be allowed," the bench said in its August 31 order.

The green panel said that even if a part of the project is held to be of public utility, in that garb the main project is of commercial nature and goes upto three stories above the hill level.

"We, thus, do not find it appropriate to entertain the applications to review/modify the order of this tribunal," the bench said.

The NGT said that the supervisory committee itself has found that the project is partly of public utility and partly for commercial purposes and is not within the purview of directions of this tribunal.

"It is difficult to say that the entire project is necessitated by the order of the High Court, as sought to be contended. Precautionary principle is significant in such matters and in the main judgement such projects have been found to have potential for disasters, based on expert studies," the NGT said.

The NGT in 2017 had banned all construction, residential or commercial, in any part of the "green, forest and core areas" of Himachal Pradesh and within three metres of the national highways.

It had also formed the Supervisory Committee to consider and evaluate the need for construction of buildings of exceptional nature and make recommendations, if necessary.

The tribunal was hearing a plea filed by Rail Land Development Authority seeking directions to permit the project of multi-level parking and other commercial activities, including Hotel on the railway land (Railway Godown below Winter Field) at Shimla. PTI