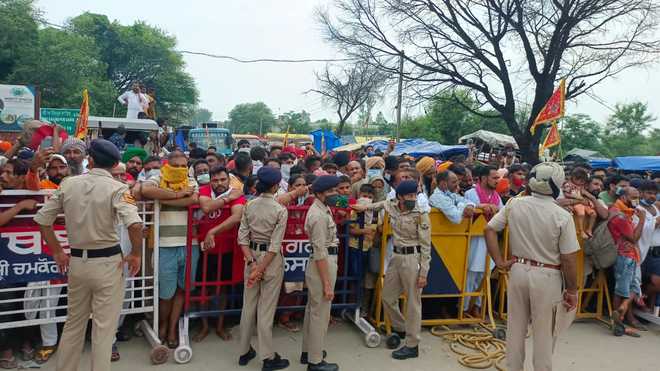 A large number of devotees from various parts of Punjab, who were on their way to pay obeisance at Naina Devi temple today, were turned away from the Himachal Pradesh border near here for not having RT-PCR negative report or Covid vaccination certificate.

This led to a chaos as the devotees demanded the removal of restrictions. They squatted on the highway and raised slogans against the Himachal government, causing a traffic jam. Following a fresh surge in cases, HP recently re-imposed curbs on the entry of outsiders. Probably unaware of the restrictions, hundreds of devotees reached Kolan Wala Toba, the entry point from Punjab, in the morning. As the hill state’s police refused entry to those not carrying either a negative report or a vaccination certificate, the crowd swelled at the checkpoint. A few devotees said the government should have announced its decision at least a fortnight ago as several people visited the shrine on foot, a journey that had to be started days in advance. Ropar SP Ajinder Singh and Anandpur Sahib DSP Raminder Singh Kahlon coordinated with the civil administration to arrange on-the-spot testing facility to pacify the devotees. Deputy Commissioner Sonali Giri said more such facilities would be set up en route to Naina Devi tomorrow.