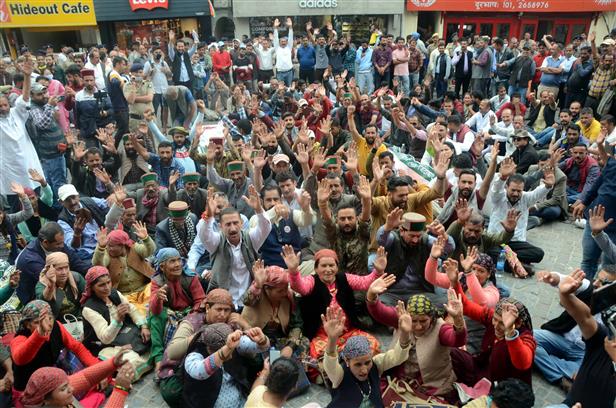 Apple growers seem determined to not back out from the fight they have started over their depleting profit margins.

A day after courting arrest at the Mall Road over the “betrayal and indifference” of the government, they have decided to gherao the three Adani-owned CA stores on August 25.

Besides, the growers have also decided to open a legal front against the government – the Sanyukt Kisan Manch will go to the court seeking the implementation of the APMC Act shortly.

The Adani owned three CA stores, along with a few other private CA stores, procure apple from mid August till the season ends. The stores sell this apple at a higher price in the market once the harvesting season is over. At the moment, Adani and other private CA stores are small players in the total apple business. Out of the total 5-7 lakh metric ton apple produced in the state, the three Adani stores procure around 18,000-20,000 metric ton, around just two to three per cent of the total sale.

“Adani stores may not be procuring a lot, but their procurement rates influence the open market. More often than not, the market slumps after the Adani stores announce their procurement prices,” said Chauhan. He further claimed that the premium apple these CA stores buy at around Rs 75-85 are later sold for much higher profit margins.

“The growers’ profit, on the other hand, is decreasing day by day because of the sharply rising input costs. So, all we are demanding is that these stores should offer us better price, especially when their own profit margins are so high,” said Chauhan.

“Adani offered a price of Rs 88 per kg in 2020, and in 2022 they are offering Rs 76 per kg when the growers’ input cost has increased so much. How is this justifiable?” asked Chauhan.

Apart from the protests at various places, SKM has decided to corner the government legally as well. “We will soon move the court against the government for not implementing APMC Act. The government will have to answer in the court why it is so reluctant to implement the Act and provide all facilities mandated in the Act to the growers,” said Deepak Singha, a member of SKM.