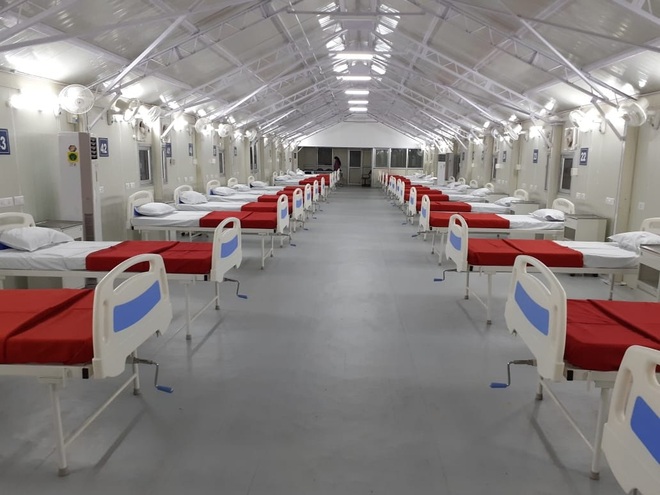 The faulty pipeline led to the loss of oxygen from 20 of the 40 cylinders provided to the makeshift facility at Nalagarh.

Two critically-ill patients (a 29-year-old man and a 32-year-old woman) were shifted to the ESIC Hospital at Katha in Barotiwala in the district today after they did not get oxygen due to a leakage in the supply pipeline at a newly created makeshift hospital at Nalagarh.

The faulty pipeline led to the loss of oxygen from 20 of the 40 cylinders provided to the makeshift facility. Four doctors have been posted at the makeshift hospital.

An anaesthetist was deputed at the ESIC-Katha after this episode. Though the doctors at the Nalagarh hospital wanted to shift the two patients, who were facing breathing problem, to a higher medical facility, they failed to get approval from two other hospitals.

Deputy Commissioner KC Chaman said, “Two serious patients were on Saturday shifted from the makeshift hospital at Nalagarh to the ESIC Hospital at Katha where they were provided oxygen and ventilator support. Some technical glitches led to disruption in oxygen supply and efforts are afoot to rectify the fault”.

“Of the eight ventilators available at the ESIC Hospital, Katha, two were made functional on Saturday and efforts were afoot to make the remaining ones operational soon. Requisite connectors are being arranged from Wipro industries,” added Chaman.

The Central Building Research Institute, Roorkee, had set up the makeshift hospital in February and Vice-President M Venkaiah Naidu had inaugurated it virtually. Two ventilators available there are yet to be made functional due to the lack of accessories such as multipurpose monitors and connectors with humidifiers of requisite units.

The Block Medical Officer had apprised senior officials about the requirement of connectors on April 16 but precious little had been done to make them functional.

Doctors said ventilators received by the state under PM-Cares had failed to operate due to technical glitches. The absence of 5 ampere sockets was being cited as one of the reasons.

The faulty pipeline led to the loss of oxygen from 20 of the 40 cylinders provided to the makeshift facility at Nalagarh (pic).