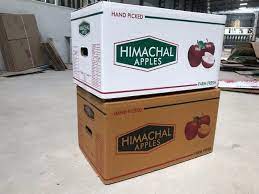 The HP Corrugation Box Manufacturers Association has demanded setting up of a packaging cluster at various industrial clusters like Parwanoo, Kala Amb and Baddi with various incentives to promote this small sector.

Other demands like abolition of GST on packing of fruits and vegetables was also raised on the plea that sale of farmers produce is subject to vagaries of weather.

The association also resolved to work for the upliftment of the industry which is concentrated in the tiny sector and faces issues like lack of capital. Issues like promoting young energetic boys and girls to avail incentives to promote start-ups and open own enterprise were also discussed.

Addressing the entrepreneurs, Health and Family Welfare and Ayush Minister Dr Rajiv Saizal said they were the backbone of horticulture sector and said the state government was making every effort to promote investment in Himachal.