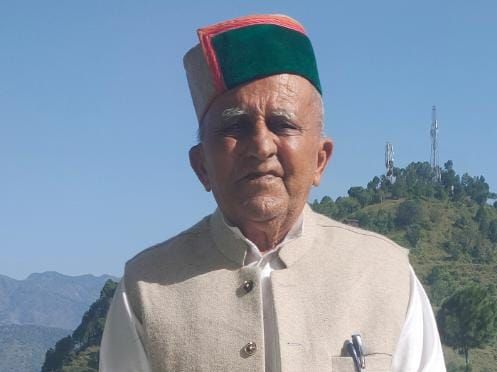 Sarek, who received the national award from President Ram Nath Kovind for his contribution to folk culture in 2018, belongs to Rajgarh in Sirmaur district. The 81-year-old, a popular Pahari litterateur and folk artist, has been an important figure in the promotion of the dialect and has dedicated his life to the cause of Sirmauri culture.

Sarek was overwhelmed with joy at hearing the news. Talking to The Tribune he said, “I don’t think I deserve this honour. I attribute it to the good wishes of the people who have appreciated my efforts in keeping the age-old Sirmauri culture alive”.

He has translated 51 poems of Rabindranath Tagore as part of a Central government project received by Chudeshwar Loknritya Mandal, Rajgarh.

He is passionate about keeping alive the Sirmauri culture and traditions, rare values, cuisine, etc., for its richness and heritage value.

Though Sarek believes that there has been a dip in the number of Sirmauri speakers, he says surveys conducted at their own level indicate that Sirmauri is still spoken in the region by a large number of people. “Sirmauri is the first language of not just the people of Sirmaur, but it is also spoken in some parts of Uttarakhand,” saya Sarek.

Dharamsala: Lalita Vakil was overwhelmed at receiving Padma Shri, the highest civilian award, for her contribution in preserving the traditional art of Chamba ‘rumal’. “I have been overwhelmed with phone calls and people congratulating me since the government announced the award,” she said while talking to The Tribune.

“I have been working for the promotion of Chamba ‘rumal’ for the past about 50 years. This award is not just a recognition for me but also for the traditional art of Chamba ‘rumal’ of Chamba district. I hope it will attract more people towards learning the art of making ‘rumal’ in the district and across the country,” Lalita said.

She said she started promoting and preserving this dying art about 50 years ago. At that time there was no government support. “We used to go the DC, Chamba, for financial support. For the last few decades, I have travelled extensively across the country and abroad for the promotion of Chamba ‘rumal’.