Cherry and plum harvesting in the state will continue till June-end, when the peach and apricot crop will start arriving in the market 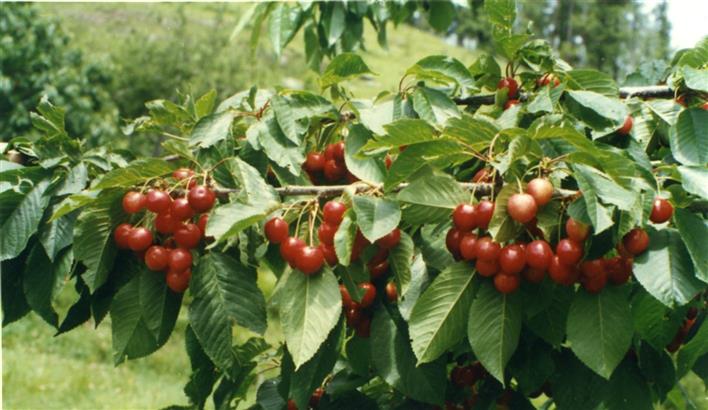 Amidst the pandemic, cheers have been brought on the faces of cherry growers, with the crop turning out to be bountiful despite natural vagaries. Also, the crop is reaching out to north Indian cities with no impact of lockdowns and earning remunerative prices owing to benefit to boost immunity.

Last year they were complaining that the crop could not reach the market owing to curbs on interstate transportation of goods.

At 773 tonnes, this year's production of luscious black and red cherries in the hill state, whose economy largely depends on horticulture, is way below the estimated yield of 1,000 tonnes but an improvement over last year's 683 tonnes, state Horticulture Director J.P. Sharma told IANS on Thursday.

"This season we were expecting production of 1,000 tonnes of cherries. But extended winter and untimely heavy rains accompanying hailstorms when the crop was maturing in April and May have damaged it at several places, mainly upper Shimla," he said.

Likewise, the plum production, which was expected 22,448 tonnes this season, has been reduced to 17,000 tonnes with an improvement over last year's 11,250 tonnes.

Sharma said hailstorms too hit the plum and peach crops when they were in the blooming stage—a period when flowers start to blossom in March.

The major markets of fruits are in Chandigarh, Punjab, Haryana and Delhi, with Narkanda town, some 65 km from the state capital, being a major hub for the fruit trade.

Trade representatives told IANS that the farmers were apprehensive this time too that the Covid-19 lockdown would hamper the marketing of their crops.

The higher reaches of Shimla, Kullu, Mandi, Chamba, Kinnaur and Lahaul-Spiti, at 6,000-8,000 feet altitudes above sea level, are ideal for stone-fruit cultivation.

Nearly 20,000 marginal farmers are involved in cherry cultivation and grow over 20 varieties on 475 hectares.

Traders say the state's imported cherry varieties, like deuro nera, stella, merchant and celsius, which have a longer shelf life, are always in great demand mainly in metropolitan cities.

The cultivation of cherries has emerged as an alternative in the apple-growing areas of the state and is fetching fairly high prices compared with other fruits.

S.P. Bhardwaj, former joint director at Dr. Y.S. Parmar University of Horticulture and Forestry in Solan, told IANS that due to its high food value the cherries fetched remunerative prices.

"The cherry farmers are getting record prices as its demand is high among the fruits due to high anti-oxidant values and rich in potassium, calcium, magnesium and copper," he said.

According to Bhardwaj, the benefit of cherry amidst the Covid-19 pandemic to boost immunity has increased its demand, with prices in wholesale and retail markets increasing rapidly compared to the previous year.

Traders say local cherry varieties have been selling at Rs 150 to Rs 200 per kg in retail in Shimla depending upon the quality and packaging, while high-end varieties like 'deuro nera' are being sold for Rs 300 to Rs 350 per kilo.

They say the current price is almost double what they received last year.

Cherry grower Mohan Begta of Kotgarh, the hub of cherry cultivation, said this time buyers have procured the fruit from the orchards themselves. "The pandemic has turned out to be a blessing in disguise for the farmers."

Cherry and plum harvesting in the state will continue till June-end, when the peach and apricot crop will start arriving in the market.

The shelf-life of normal cherry varieties ranges from two to three days, while the top varieties last up to six days.

The Himachal Pradesh's economy is highly dependent on horticulture, apart from hydroelectric power and tourism, with the annual fruit industry worth over Rs 3,500 crore.

Apples alone constitute about 89 per cent of the total fruit production.

According to the Horticulture Department estimates, lack of cold chains causes decay of 25 per cent of the produce. — IANS