Tributes paid to Himachal’s founder on his 116th birth anniversary 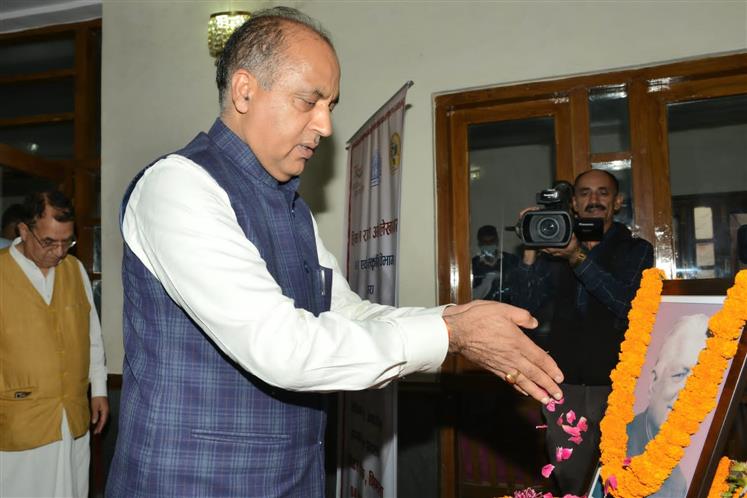 Dr Yashwant Singh Parmar was not only the founder of Himachal Pradesh but he also laid a sound foundation of further development of the state. Chief Minister Jai Ram Thakur said this while presiding over a state-level function organised on the occasion of Parmar’s 116th birth anniversary here today.

Thakur said that it was due to Parmar’s commitment and dedication that despite all odds, Himachal Pradesh got a separate identity. “He had special love and respect for Himachali culture and traditions and he never missed an opportunity to showcase the rich cultural repository of the state,” he added.

He said that Parmar was a towering personality and the birth anniversary of such a leader should be celebrated in a befitting manner. He added that at the time of formation of the state, there were only 228 km of roads. Parmar laid stress on the construction of roads and today the state has a strong network of over 39,500 km roads.

The Chief Minister said that the state had witnessed a long and eventful journey of 75 years and the government was celebrating the occasion in a befitting manner by organising 75 events throughout the state. He added that the people of the state would also be sensitised by putting up exhibitions on the theme ‘Himachal Tab Aur Ab’.

Thakur honoured Parmar’s son on the occasion. He also released a book ‘Dr Yashwant Singh Parmar Mass Leader –An Apostle of Honesty and Integrity’ written by Dr Rajender Attri. A documentary on the life of Parmar produced by the Information and Public Relations Department was also screened.

Earlier, the Chief Minister paid tributes to Parmar by garlanding his portrait at Peterhoff here. He also inaugurated a photo exhibition on the life and works of Parmar.

Speaker of the Vidhan Sabha Vipin Singh Parmar said that the vision of the the first Chief Minister for electricity, horticulture, tourism and road connectivity ensured that the state earned a name in these sectors.

Leader of the Opposition Mukesh Agnihotri said that it was due to Parmar’s efforts that today the state was celebrating 75 years of existence. He added that the committee constituted for carving out a separate identity of Himachal Pradesh had rejected the idea of making a separate state, but Parmar’s personal relations of with the Central leadership ensured that Himachal was formed.