Development in Himachal possible as people voted BJP to power both in state, Centre: PM 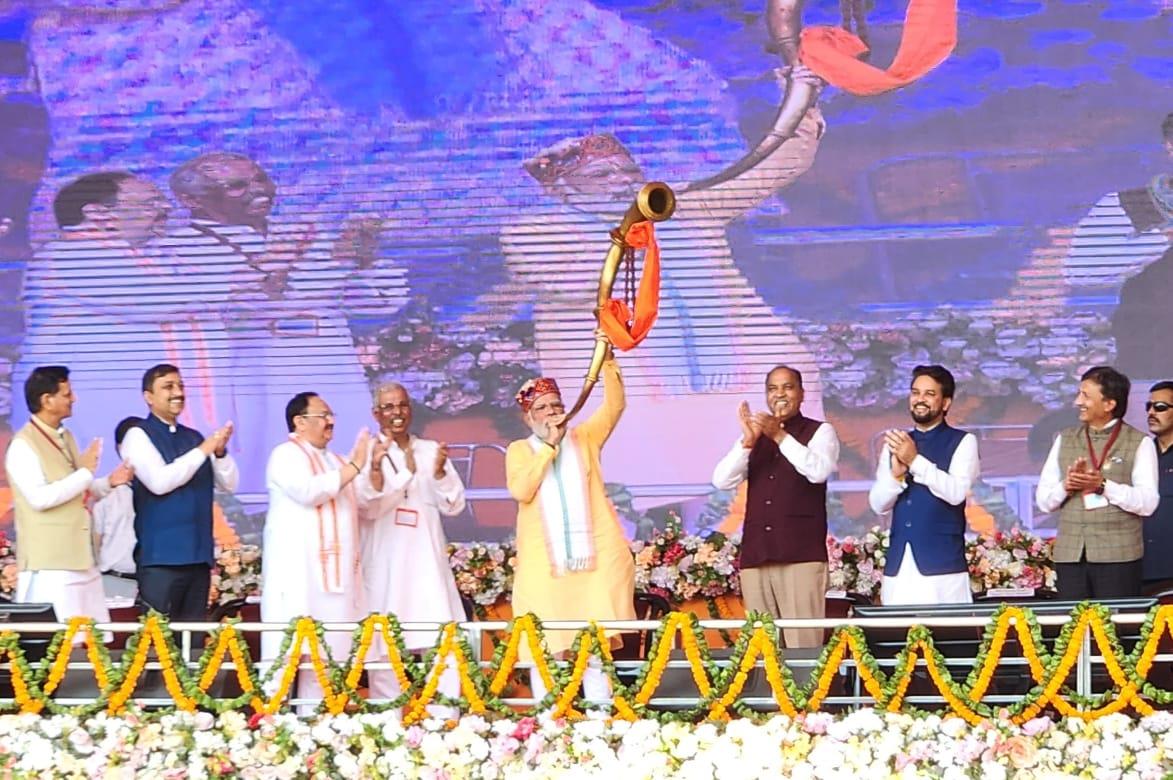 Sounding the poll bugle in election-bound hill state, Prime Minister Narendra Modi on Wednesday said it is the strength of the vote of people which had made unprecedented development possible in Himachal through the “double-engine” BJP governments at the Centre and the state.

Modi started his address in the local Bilaspuri dialect by congratulating people on Vijayadashami and saying that he was blessed to get the blessings of Goddess Naina Devi.

He added that his regime had shed the narrow thinking of confining big schools, colleges, industries and hospitals to big cities and urban centres. He said the double-engine BJP governments had undertaken development in every sphere.

He said the state known for its valiant soldiers will now be known for advanced medical facilities with AIIMS and five new medical colleges. He added that every year the state will get more doctors and nurses.

Modi said there was immense potential for medical tourism in Himachal. “People who come to India for treatment would recuperate in the salubrious environment of the hill state,” he said.

He said the AIIMS in Himachal will be known as Green AIIMS with everything being eco-friendly. He added that Himachal is one of the four states which was chosen for setting up of a medical device park.

Considering the fact that women constitute almost half of the electorate, Modi said several of his government’s schemes were aimed at making the life of women better, be it the Ujjawala, Swach Bharat or drinking water schemes.

He also broached the issue of ‘one rank, one pension’ with a sizeable section of the families having at least one member serving in the armed forces.

Slogans of ‘Modi-Modi’ rent the air amidst beating of drums and traditional ‘dhol-nagaras’.

JP Nadda in his address said the people of Himachal will remain indebted to the PM for dedicating AIIMS, the foundation stone of which was laid on October 30, 2017.

Nadda said Himachal was neglected by the Congress governments which even withdrew the special package given to Himachal.

Addressing the gathering, CM Jai Ram Thakur said the PM has always understood the pain and problems faced by the hill state unlike the Congress governments.

“Projects over Rs 10,000 crore have been given to Himachal by the Centre,” said Thakur.

The CM said like rest of the nation, the trend of a government repeating will change in Himachal as well as BJP will win the Assembly polls.

Assembly elections in Himachal will be held in November. The BJP is hoping to repeat by breaking the jinx of no government repeating in in the state.

PM Modi congratulated Himachal Pradesh for becoming the first state in the country to formulate a drone policy. PTI

PM Modi said Himachal plays a crucial role in 'Rashtra Raksha' and now with AIIMS at Bilaspur, it will also play a pivotal role in 'Jeevan Raksha'. PTI

Taking a dig at the previous governments, Modi said the BJP lays stones and inaugurates projects unlike those who used to lay stones and forget about completing projects after polls. PTI

13:56 05 Oct
Development possible as people have voted BJP to power at Centre and state: PM Modi

The prime minister said that development in Himachal was possible as people have voted BJP to power both at the Centre and in state. PTI

PM Modi at the rally said Bilaspur has got a double gift of development as AIIMS and hydro engineering college has been inaugurated today. PTI

PM Modi began his speech in Bilaspur. He said he was elated to be present at the 'Devbhoomi'.

12:36 05 Oct
PM will take part in the International Dussehra Fair at Kullu

Prime Minister Modi will take part in the International Dussehra Fair at Kullu before returning to Delhi.