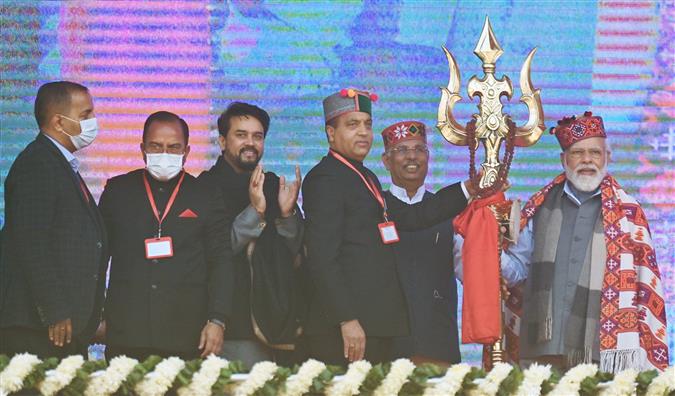 PM Narendra Modi with a 'trishul' gifted by HP CM Jai Ram Thakur at a rally in Mandi on Monday. Jai Kumar

Taking a dig at the Congress for indulging in vote bank politics and self-promotion, Prime Minister Narendra Modi today said the BJP believed in the ideology of ensuring development of the country and welfare of the poor and downtrodden.

Addressing a rally here today to mark the completion of four years of the BJP government in Himachal, Modi said the endeavour of the double-engine regimes —- at the Centre and state —-was to ensure “sabka saath, sabka vikas”. The function was attended by Governor Rajendra Vishwanath Arlekar, Union Minister for Information and Broadcasting Anurag Thakur, Chief Minister Jai Ram Thakur, former CM Prem Kumar Dhumal, ministers and party legislators. “While the BJP firmly believes in the ideology of ‘sabka vikas’, the other parties are guided by the principle of ‘apna vikas’,” he said in an oblique reference to the Congress.

The PM said Covid vaccination of children in the age group of 15-18 would begin from January 3 while the precaution dose would be administered to healthcare workers and people above the age of 60 with comorbidities from January 10, 2022.

He said it was essential to protect environment while setting up developmental projects in Himachal. “It is also the responsibility of tourists coming to HP to not litter plastic on hill slopes and rivers as it is environmentally very degrading,” he asserted, adding that his government’s thrust was on proper plastic waste management with focus on “climate friendly new India”.

“We believe in ‘beta, beti ek samman’, which is why we feel marriage age for both boys and girls must be the same so that they can study and be financially independent,” he remarked.