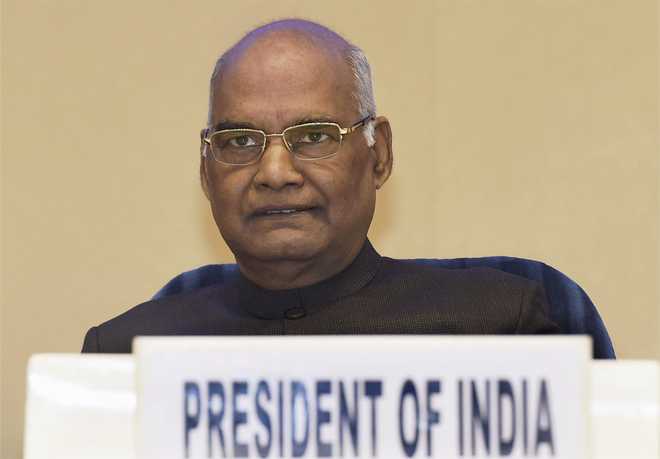 President Ram Nath Kovind will be on a four-day visit to Himachal Pradesh from Thursday, a state government official said.

He will address a special session of the Himachal Pradesh Assembly and will be chief guest at the Valedictory Ceremony of the Indian Audit and Accounts Service at the National Academy of Audit and Accounts at Shimla, the official said.

The President will stay at Cecil hotel at Chaura Maidan here instead of The Retreat—the President’s residence at Chharabra on the outskirts of Shimla—as four its employees had tested positive for COVID-19 on Saturday, he added.

The state Assembly Speaker Vipin Singh Parmar told the media here on Tuesday that President Ram Nath Kovind would address the special session of the state Assembly on Friday at 11 am to mark the golden jubilee of Himachal Pradesh’s statehood.

Apart from the sitting MLAs, all the former MLAs including former chief ministers Shanta Kumar and Prem Kumar Dhumal have been invited to attend the special session, the official added.

Ninety-three former MLAs, including Kumar and Dhumal, have given their consent to attend the special session.

Five MPs from the state and seven former MPs will also attend the session, the official said.

All those who will come in close contact with the President will have to carry a COVID-19 RTPCR negative report, he added.

A group photo of the President with the current and former legislators will also be taken as a memory at the Assembly, he added.

On September 18, the President will be chief guest at the Valedictory Ceremony of the Indian Audit and Accounts Service (IAAS Officer Trainees of 2018 and 2019 Batches) at the National Academy of Audit and Accounts at Shimla from 11 am to 12 noon.

According to the schedule, the President will reach Annadale Helipad on September 16 at 12 noon via Chandigarh from Palam airport, Delhi. Subsequently, he will reach Cecil hotel at Chaura Maidan here at around 12.25 pm, the official said.

President Kovind will address the special session of the Himachal Pradesh Vidhan Sabha on Friday from 11 am to 12 noon, he added.

In the evening on Friday, he will attend a cultural programme at 7.30 pm and banquet at 8 pm hosted by the state governor, he added.

On September 18, the President will be chief guest at the Valedictory Ceremony at National Academy of Audit and Accounts at Shimla from 11 am to 12 noon, he added.

On September 19, he will reach Annadale helipad at 11.15 am to leave for Palam airport in Delhi via Chandigarh. He will reach the Rashtrapati Bhavan at 1.35 pm on Sunday, the official added. PTI