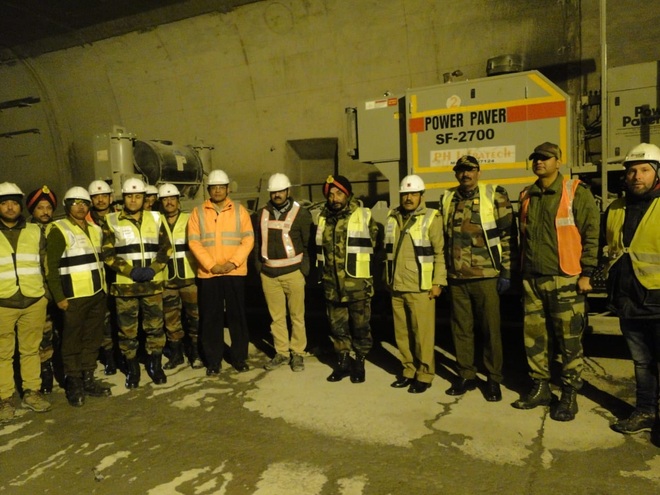 Director-General Border Roads (DGBR) today reviewed the progress of work at Atal tunnel (known as Rohtang tunnel) today. DGBR Lt Gen Harpal Singh visited the tunnel to monitor the work. Due to its strategic and national importance, the progress of tunnel work is being monitored by the Prime Minister’s Office.

The DGBR inspected the progress relating to civil construction and electrical & mechanical works. He gave directions to the officials of Border Roads Organization (BRO) engaged in the task to complete the work as per schedule. He praised the hard work and dedication of personnel involved in the tunnel work. He also motivated laborers to achieve target in time.

ADGBR Anil Kumar inspected technical details of ongoing work and issued instructions that the work be completed in a time-bound manner.

During the visit, Chief Engineer of project KP Purushottam and other officers were also present.

When completed, Atal tunnel will be lifeline of the residents of tribal district Lahaul Spiti as it would provide round the year road connectivity to the tribals between Manali and Lahaul. Due to closure of Rohtang Pass, gateway to Lahaul on the Manali-Leh highway, in winters because of heavy snowfall the road gets blocked for traffic movement for six months every year.