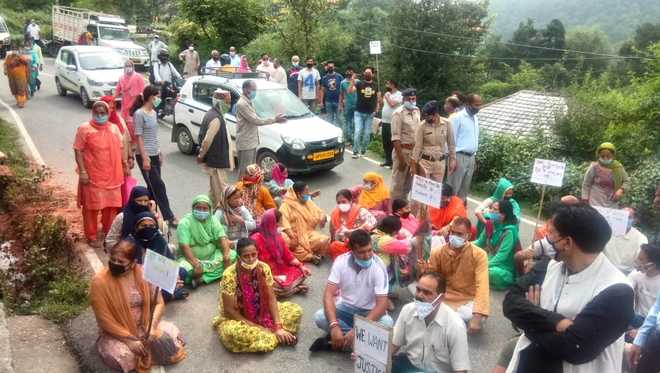 People hold a chakka jam against the death of a youth in a road accident at Jogindernagar in Mandi on Monday. Photo: Jai Kumar

The residents of Jogindernagar today staged a protest against the National Highways Authority of India (NHAI) over poor condition of the Pathankot-Mandi highway, which claimed the life of one youth on September 10.

The villagers said that victim Mohit Kumar Awasthi (29) was travelling on his bike towards Kangra from Jogindernagar side, when he met with a road accident at Neugal bridge near Paror.

They said due to potholes on the highway, the bike of the victim tumbled. He fell down because on the highway and died on the spot.

Brij Gopal Awasthi, a social activist, said that after the death of the youth, no official of the local administration or the NHAI visited the affected family. No financial assistance was provided to the family of the deceased.

“We urge the state government to ask the NHAI to undertake maintenance work of this highway on priority to avoid such tragedy in future,” the villagers said.