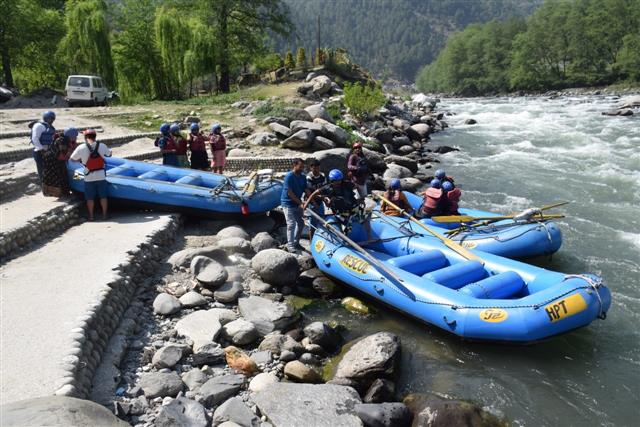 The High Court has permitted paragliding and river rafting in Kullu only by those operators who had fulfilled the requisite formalities and taken safety measures.

The High Court yesterday permitted paragliding and river rafting in Kullu only by those operators who had fulfilled the requisite formalities and taken safety measures.

Besides, the court also permitted 34 all-terrain vehicles (ATVs) and 29 snow scooters to resume operations after complying with the rules and guidelines and following adequate safety measures.

Manali SDM-cum-officiating District Tourism Development Officer Surender Thakur said he had issued orders for the resumption of the adventure activities, as permitted by the High Court.

All these activities, which were being conducted without following rules and without licence, were stopped on February 3 following the orders of the High Court.

The court had allowed the adventure sports activities to resume taking into consideration the remarks of the Secretary, District Legal Services Authority (DLSA), Kullu.

The DLSA Secretary in his comments filed in the High Court stated that paragliding in the district was stopped primarily because of two reasons that the Technical Committee had not approved the equipment of the operators and the registration of the operators was faulty because none of them had produced the requisite insurance at the time of registration.

He added that the registered operators had now obtained insurance. The main objections had been addressed, therefore, there was no objection to the resumption of the activities, he added.

He stated that river rafting in the district was stopped mainly because the Technical Committee had not cleared the equipment of the operators.

Moreover, the operators were registered for three years instead of one year in violation of Rule 4 (1) of the Himachal Pradesh River Rafting Rules, 2005 and rafts were not accompanied by rescue rafts or kayaks. He added that now necessary corrections had been made in the certificate of registration.

It had been decided that no operator would send one tourist raft, which should always be accompanied by a rescue raft or kayak or alternatively one rescue raft should be sent with three tourist rafts in a group. The main objections had been addressed, therefore, there was no objection to the resumption of this activity.

The Secretary stated that the operation of ATVs and snow scooters was stopped because it was found that the date of fitness of all these vehicles had expired on April 30, 2020.

The fitness of 34 ATVs and 29 snow scooters had been validated up to February 5, 2023, therefore, there was now no objection now.