Landslides in Himachal and Maharashtra have put the spotlight on early detection, warning, prevention systems and zoning of risk-prone areas, besides mandatory monitoring of any construction in the hills 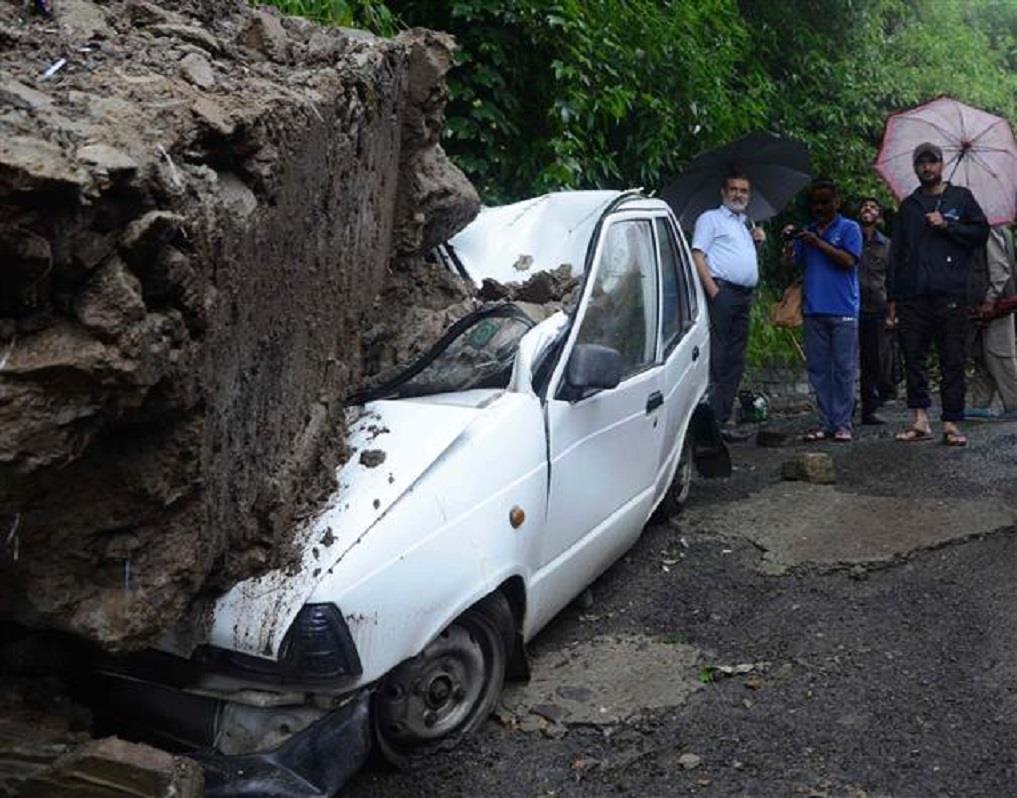 Hill districts with high population density are more prone to landslides, according to an analysis of 45,334 landslides by the National Remote Sensing Centre.

A loud sound of gushing water jolted Devi Lal out of sleep around 4 am on April 9, 2012. Rushing out of his house, he realised that the newly constructed tunnel of the Chamera-III hydroelectric power project above his village in Chamba district of Himachal Pradesh was leaking. All families moved to a safer location before the slope gave in and debris buried the fields, houses and shops. “Though all villagers escaped unharmed, our lives are yet to be rebuilt due to displacement and inadequate compensation,” said Devi Lal, who is currently fighting a court case seeking an enhanced rehabilitation package.

India is one of the countries that is most vulnerable to landslides with 4.3 lakh sq km of its hilly and mountainous areas being landslide-prone. The recent incidents in Maharashtra and Himachal Pradesh have put greater focus on the need for early detection and prevention of landslides. Traditionally, natural events like rainfall and earthquake are known to cause this large movement of rock, soil and debris, but construction of roads and buildings, mining and hydropower projects are now increasingly destabilising slopes, making them more susceptible to slippage. Changing rainfall patterns and rise in extreme weather events like cloudbursts are adding another layer of complexity to the scenario.

Signs of an impending landslide

India registered around 11,020 deaths from 892 landslides between 2004 and 2016, which made up 18 per cent of the total global casualties, found a study by Sheffield University, UK. The Northwest Himalayas spanning Uttarakhand, Himachal Pradesh, Ladakh and Jammu and Kashmir contribute 66.5 per cent of the landslide area in India, followed by the Northeast Himalayas (18.8) and Western Ghats (14.7 per cent).

Rudraprayag (Uttarakhand), Tehri Garhwal (Uttarakhand), Rajouri (Jammu and Kashmir), Thrissur (Kerala) and Pulwama (Jammu and Kashmir) are the top five hill districts most vulnerable to the damage. These places not only have a large landslide-prone area, but also a high number of people, livestock, houses and roads exposed to these disasters, according to an analysis of 45,334 landslides by the National Remote Sensing Centre, ISRO.

Among the states, Uttarakhand was found to be the most vulnerable owing to major pilgrimage routes. Even though the Northeastern states record a large number of landslides annually, they are less exposed to the adverse impacts because of lower population density and large uninhabited areas. On the other hand, Kerala has a high exposure of people and houses because of very high population and household densities in Thrissur, Malappuram and Palakkad districts.

However, these are also the areas which are witnessing big developmental projects causing deforestation, change in drainage channels and slope instability. “The recent landslide in Kinnaur became famous because of the viral video but we have been living this reality for many years now. Several people have lost their lives and livelihoods due to landslips caused by tunnelling, blasting and deforestation done for hydropower projects and construction of new roads,” said Shanta Kumar Negi, president of Hangrang Sangharsh Samiti, a group campaigning against hydel power projects in Hangrang valley of Kinnaur, Himachal Pradesh. “The government should prioritise conservation to deal with climate change rather than destroying the ecology in the name of development and thus making us more vulnerable to natural disasters,” he added.

The urban areas of hill states are also undergoing rapid concretisation at the expense of safety. Land-use plans and building regulations of these towns are either invalid or not being enforced. “Existing building regulations enforced in hill towns are mostly inspired from the Delhi Master Plan(s), which are not appropriate in the context of hill towns, as the geo-environmental and socio-developmental context of Delhi is varied to a greater extent from that of hill towns,” according to the National Landslide Risk Management Strategy 2019 by the National Disaster Management Authority (NDMA). The NDMA recommends zoning of mountain areas according to their susceptibility to landslides and no construction in the hazardous areas, spring lines (path of spring), first-order streams (small streams with no tributaries which flow into other bigger streams) and hill slopes inclining at more than 30 degrees angle to the ground.

The Geological Survey of India (GSI) is currently working on a national landslide susceptibility map under which areas are divided into different zones according to probability of a landslide. It has already covered 85 per cent of the entire 4.3 lakh sq km landslide-prone area of the country on a 1:50,000 scale map. On a scale of 1:50,000, 1 cm on the map would denote 0.5 km on the ground.

“These maps can be referred to while planning development in hill or mountainous areas. Big construction or road expansion can be avoided at places with higher probability of a landslide. If not avoidable, the site should be properly studied and appropriate engineering solutions provided for safe and sustainable construction,” said Dr Saibal Ghosh, Director, Landslide Studies Division, GHRM Centre, GSI. “More granular maps, however, will be required for site-specific planning which we are stressing on at many places nationally.”

The GSI is also carrying out 1:10,000 scale landslide susceptibility mapping for select vulnerable sectors and 1:1,000 at site-specific landslide investigations on requests received from the state governments or the road maintenance authorities concerned. “We will try to cover around 200 critical sectors on important road corridors and a few hill townships in the next five years,” said Dr Ghosh. “This work relies less on remote sensing and more on footwork and hence takes more time.”

Mizoram’s capital city Aizawl has taken a lead over other hill towns and developed a landslide action plan using 1:5,000 scale susceptibility maps, besides enacting new regulations to guide construction activities. Under these regulations, any construction in risk zones will require a mandatory assessment by a geologist or geotechnical engineer, who can also suggest remedial measures to stabilise the slopes.

“We have also identified six most-hazardous spots for landslides. Any construction activity will be prohibited in future in these areas,” said Zohmingthanga, executive engineer with the Aizawl Municipal Corporation.

Kerala, which braved massive landslides from 2018 to 2020, has also prepared an action plan giving high priority to landslide hazard zonation maps in hilly areas at the municipality and panchayat levels. “There is greater focus on devising land use plans for the most hazardous areas according to land zonation mapping, thus avoiding future disasters as far as possible. The Chief Minister also mentioned this in the state Assembly, which makes it difficult for the government to go back on its word now,” said Dr Sarun Savith, Assistant Professor of Geography with Kerala-based Sree Sankaracharya University of Sanskrit, who has developed a climate crisis vulnerability index for all districts of the state.

Improved weather forecasting has increased India’s capacity to deal with cyclones. Fishermen are warned against going to the sea in advance, people along the coast are shifted to safer locations and emergency teams are on alert to deal with any eventuality. Such a system is lacking for landslides even though rainfall is the most common trigger that brings down the already destabilised slopes.

The GSI is experimenting with a rainfall-based early warning system for landslides in Kalimpong (West Bengal) and Nilgiris (Tamil Nadu). The model is based on a terrain-specific rainfall threshold, which is the amount of rainfall a slope can hold before a landslide gets triggered. “We are using past rainfall and landslide occurrence data for this experiment, but rainfall distribution in hills can be quite variable. This is the reason we need to validate this model on the ground for multiple monsoon years,” said Dr Ghosh. “We plan to carry out similar research in a few other landslide-prone states too, and if proven successful after ground testing and validation, this model would be rolled out as an operational regional early warning system in all landslide-prone areas.”

The Indian Institute of Technology (IIT), Mandi, has developed a surface-level motion sensor-based early warning system. The device gathers information about weather parameters, soil moisture, and soil movement and when it detects a large displacement of soil which could result in a landslide, it sends SMS alerts.

In 2018, the sensors alerted officials about an imminent landslide on the Mandi-Jogindernagar highway, which helped the police turn away vehicles from the road before it was washed away.

“We have installed 13 landslide monitoring systems in Himachal and recently signed an agreement with the Mandi administration to scale up these systems to 20 in the next three years,” said Dr Varun Dutt, Associate Professor, School of Computing and Electrical Engineering, IIT, Mandi.

While it may take time for such systems to be scaled up and cover all risk zones, improved building plans and precautionary measures can go a long way in cushioning the impact of landslides.

“It is possible to include landslide forecasting in the weather bulletins by taking into account antecedent rainfall and local trends like recent developmental activities and previous landslide incidents in the region. If the soil is already saturated with moisture during monsoon, more of heavy rainfall is likely to run off taking along the destabilised slopes,” said Anand Sharma, former head of the Indian Meteorological Department (Northern India). “All states should have block-level teams which can identify vulnerable spots based on recent construction and history of landslide events. The spots can then be stabilised before the rains arrive. The administration can also put barricades to divert tourists away from vulnerable spots on the days when heavy rains are forecast for the region.”