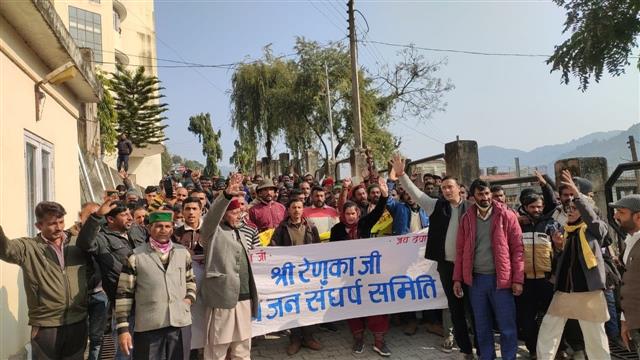 Families displaced due to the Renuka Dam project held a protest at the office of Himachal Pradesh Power Development Corporation Limited (HPCL) at Dadahu during its foundation day celebrations today.

The 1,142 affected families protested under the banner of the Sangharsh Samiti headed by its president Yogendra Kapila. He said, “It is lamentable that successive state governments and the dam authorities have not accepted their demands being raised since 2007 while they have been running from pillar to post”. Around 300 persons also took out a protest rally at Dadahu town demanding an immediate solution to their long-pending demands, including issuance of cards to those displaced, and rehabilitation and jobs.

The affected people rued that though they were promised land, little had been done to allot it. “At a time when the dam officials are preparing for the online foundation stone laying of the dam, it is deplorable that the issues of the displaced families have not been addressed,” said Kapila.