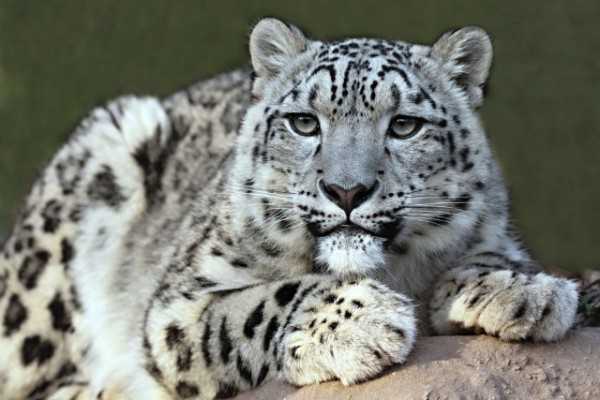 A rescued snow leopard -- a native of the alpine and high-altitude regions of the Himalayas -- has arrived at the Himalayan Nature Park near Shimla, wildlife officials said on Monday.

After veterinary checkup, it was found the abandoned wild cat, weighing 7 kg, was stressed, under-fed, weak and suffering from severe dehydration.

A wildlife official told IANS that the rescued snow leopard is just a six to eight months old, most probably abandoned by the mother.

Rather than re-introducing it in its alpine habitat, wildlife officials transported this vulnerable species, which was trapped in a sheep pen in a hamlet in the Spiti Valley, for veterinary checkup to the nature park in Kufri, some 15 km uphill from here, known for temperate vegetation.

The decision has angered wildlife activists.

The wildlife wing admits that there is no wildlife rehabilitation centre in high mountain passes of the state where the Central government-funded Snow Leopard Conservation Project is underway.

"The snow leopard was examined on Sunday and we found that it was ill and very weak, owing to dehydration," veterinary surgeon Sandeep Rattan told IANS.

The cub was also under stress -- physical and emotional -- owing to separation from the mother. "There are some physical injuries and gangrene too at some portion," Rattan said.

"Our first priority is to regain its normal weight. A team is carrying out the necessary treatment. We are feeding a small chicken to it. Since its tooth development is at the primary (cub) stage with canine teeth yet to surface, it will be difficult for it to savage natural prey," he said.

Rattan said that might be the reason it was looking for an easy prey in the nature, i.e. livestock.

The snow leopard was trapped in Gue village, famed worldwide for the 500-year-old mummified remains of a Buddhist monk, under the Kaza subdivision in Spiti Valley, some 350 km from Shimla, on May 1. The village is close to the Indo-Tibetan border.

Divisional Forest Officer Hardev Negi, who led the team to trap the wild cat, said the snow leopard was trapped after the villagers complained that it was killing their sheep.

Wildlife officials, who said that they don't interfere with the snow leopard's natural life cycle in the wild, told IANS that without its mother, the cub wouldn't be able to learn survival skills.

In this case, the probability of releasing the cub into the wild is bleak. "The young one is most likely to be kept in the nature park alone," an official said.

Rattan said that searching the traces of its mother would be a futile exercise, as the range of a snow leopard in nature is very wide and the terrain is treacherous and rocky.

Animal caretakers placed the cub under 24-hour surveillance under CCTV surveillance and have started feeding it chicken meat and vitamins.

Taking care of the orphaned snow leopard is a first-of-its-kind experience, but confident caretakers believe that they will do their best to save it.

16 hours ago
10
Punjab Assembly session: On the sidelines

Aaditya also plays a key role in decision-making within the ...