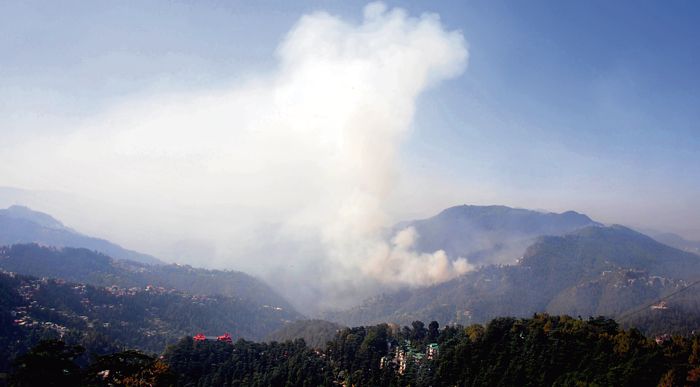 A firebroke out at the Tara Devi jungle near Shimla on Sunday. Photo: Amit Kanwar

The early onset of summer and prolonged dry spell have sparked fires in forests in Dharamsala, Shimla, Mandi and Solan districts as a total of 445 fires have been reported within the first month of the fire season.

Though the fire season period is from April 1 to June 30 this time so many fires have been reported within the first month itself. A total of 445 forest fires, affecting an area of 3195 hectares have been reported till date. The Forest Department has pegged the damage at Rs 88 lakh. Though a majority of the forests where fire has been reported are pine some other forests too have been damaged.

Yesterday itself, a total of 32 forest fires affecting 173 hectares of land were reported with the damage being assessed at Rs 5.50 lakh. Pine forests, where most of the fires are ranging, constitute about 15 per cent of the total forest cover in Himachal. “With the bark of the pine trees being very hard, a majority of the trees affected by fire get rejuvenated but in some cases the damage is permanent,” said Anil Sharma, State Nodal Officer for Forest Fires.

The forest fire situation is the worst in Dharamsala area with 120 fires being reported till now. A massive fire in the Tara Devi forest along the Shimla-Solan highway had been raging for the last two-three days. The second highest number of fires have been reported from Rampur division, followed by 83 in Mandi and 61 in Shimla.

Even though the Forest Department has been linked to Forest Fire Alert System, where an immediate alert of smoke bellowing out from a forest is sent by the satellite imagery with the Forest Survey of India (FSI), yet this year the situation seems quite alarming. “The alert received from the FSI is sent to the concerned DFO, Range Officer as well as Forest Guard to ensure that there is prompt action and the fire is contained right at the outset and there is no lapse at any level,” asserted Sharma.

The Forest Department has also been creating awareness at its own level and has asked the elected representatives to educate people and seek their cooperation during meeting of gram sabhas being held.

Steps like creating fire lines, controlled burning and clearing road sides of the dry and highly inflammable pine needles has been undertaken as a precautionary measure.