River in spate, no trace of Kullu flash flood victims : The Tribune India

River in spate, no trace of Kullu flash flood victims 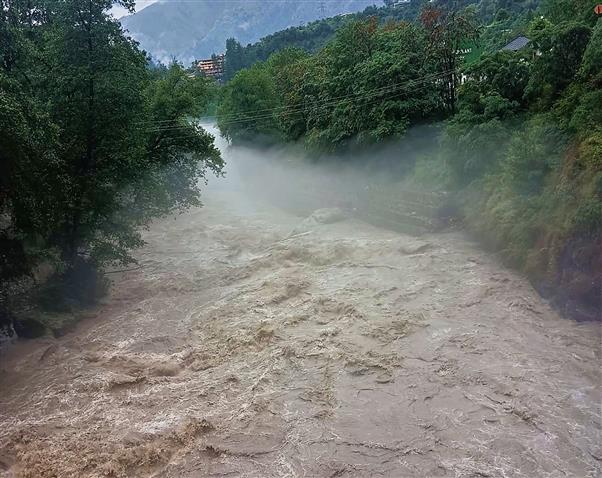 The search for the four missing persons feared washed away in a flash flood at Choj village of Parvati valley yesterday failed to yield any result as the river remained in spate.

The search for the four missing persons feared washed away in a flash flood at Choj village of Parvati valley yesterday failed to yield any result as the river remained in spate. Teams of the NDRF, SDRF, police and Home Guards were engaged in the rescue operation.

Recalling the fury, villagers said they heard a loud noise around 5 am, which forced them to rush out of their houses. “Initially, we thought a quake had hit the area. We got terrified at the sight of slush and strong water flow in Choj nullah,” said Chunni Lal, president, Chhalal Panchayat. He said the incident continued to haunt the villagers, most of whom spent a sleepless night yesterday.

Nanak Chand, a local resident, said he got a call about the cloudburst from Gohar village on the higher reaches, following which he alerted villagers and tourists to move to safer places.

“Soon, the floodwaters reached our village and there was chaos all over. Four persons camping in the area went missing,” he said, adding that several houses and camping sites were washed away.

Fellow villagers Khem Raj, Pene Ram and Duni Chand too had similar stories to tell. They urged the government to compensate them for the losses. Chand said he did not want to risk the lives of his family members by staying in the village.

Meanwhile, Jal Shakti Minister Mahender Singh Thakur on Thursday visited the area. He met locals and directed the authorities to extend all possible support to them. He also assured villagers of speedy relief work and adequate compensation.

A search team recovered the body of Kewal Krishan (43) of Paddhar village in Mandi from the Beas. Krishan was one of the occupants of the car that fell into the river near Babeli village on Kullu-Manali highway on Wednesday.