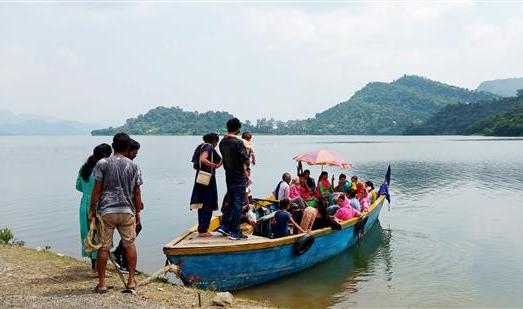 Locals board a boat to travel between villages around the Gobind Sagar lake in Una district. Photo by writer

Two road alignment proposals for the construction of a road bridge over the Gobind Sagar lake between Lathiani and Bihru in Una district and the spots for the two ends of the 840-metre bridge have been finalised.

The bridge will reduce the distance between Una and Hamirpur districts by about 20 km and also allow road access to people living in villages around the reservoir, who now use boats as means of transport.

Rajesh Kumar, assistant engineer at the Una subdivisional office of the National Highways, said the 209-km road connecting Amritsar with Bhota in HP was declared national highway a few years ago.

Rajesh said while work on a large portion of the NH is either complete or ongoing, the only missing link is the 8-km section between Bihru and Lathiani over the lake.

According to the highways authorities, the bridge will be built in two parts, the first 440-metre part to be supported by cables and the remaining carried on pillars.

Meanwhile, the government, through the Kutlehar Tourism Development Society, has proposed to set up a tourism hub near Bihru on the banks of the reservoir. The facilities like adventure water sports, angling, bird watching and nature trekking are also proposed.