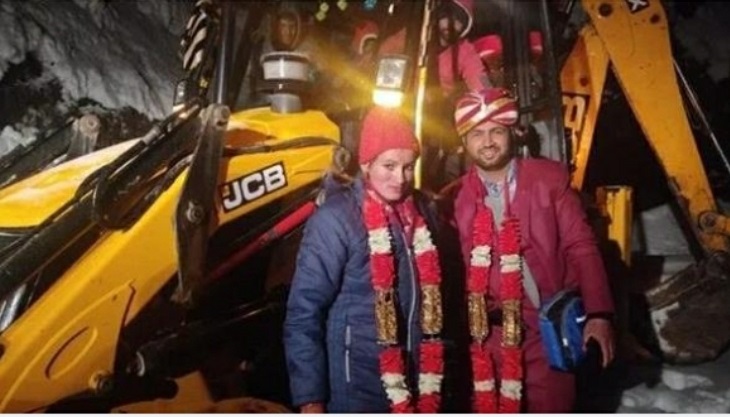 A couple who got married in Sounfer village of Sirmaur after the guests reached the venue on an excavator. Tribune photo

Even 3 feet of snow did not deter a wedding party to venture ahead as they took help of an excavator to reach the venue on the Sangrah-Gattadhar road in Sirmaur district last evening.

A wedding party had to leave from Javga to Sounfer village on the Sangrah-Gattadhar road last evening, but due to heavy snow, the stretch was closed 8 km ahead of Sangrah. Initilly, an excavator was used to clear the road, but later about six persons, including the groom, climbed on the excavator and proceeded towards the wedding venue last night.

Two more excavators were arranged for the guests. The wedding took place this morning. Heavy snow lashed upper reaches of Sangrah. Earth excavators were used to clear the snow in these rural areas as no cutter was available with the Public Works Department.