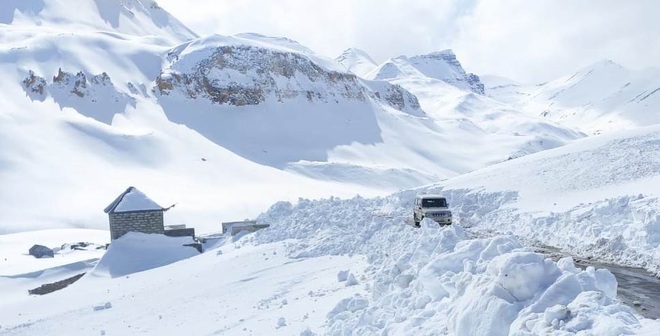 Patseu, Zingzingbar and Bharatpur City are attractive tourist attractions on the way to Baralacha

If the tourists visiting Kullu-Manali are unable to visit the 13,058-feet high Rohtang Pass when it is out of bounds due to heavy snow, they now have the option of visiting the Baralacha Pass (16,040 feet) or Shinku La (16,600 feet) in the Lahaul valley through Atal Tunnel in one day from Manali.

The Border Roads Organisation (BRO) set a record this year by restoring the Manali-Leh route much ahead of the normal time in March. As a result, tourists will be able to enjoy pleasant journey of the Manali-Leh road.

Darcha is 101 km from Manali and the Baralacha Pass is 45 km from Darcha. Tourist places like Patseu, Zingzingbar and Bharatpur City are also attractive tourist attractions on the way to Baralacha. Shinku La is 40 km from Darcha on the Zanskar-Padum route and it connects border areas of Ladakh to Himachal. As these passes remain covered with snow throughout the year, tourists can enjoy snow even in summers.

The snow from the Rohtang Pass is expected to melt early this year as the region witnessed lesser snowfall in the winter but the visitors will be able to witness the snow at the Baralacha and Shinku La passes during the summers.

The travel from Manali to Baralacha or Shinku La will be less cumbersome as the BRO, working relentlessly, has improved the condition of the road. A resident of Manali said tourists would be able to undertake the journey to these passes within one day from Manali. He said new tourist destinations were likely to emerge as tourist footfall in the Lahaul valley was increasing in the wake of the opening of Atal Tunnel.

There are arrangements for stay of tourists in Darcha, Jispa, Gemur, Keylong and Sissu in Lahaul. The government has also registered more than 400 homestays in the Lahaul valley and tourists can also stay in these units.

At present the tourists are rushing to the Lahaul valley to witness snow as the Rohtang Pass has not been thrown open yet. The BRO is yet to undertake the snow-clearance operation on the Manali-Rohtang road as Atal Tunnel has already been thrown open. Commander Colonel, 38 Border Road Task Force Uma Shankar, said there was forecast of snowfall in the coming days and road clearance to Rohtang Pass will be done after that.