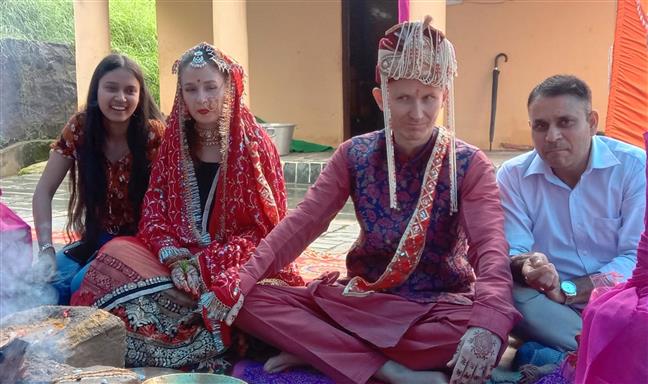 Russian boy with Ukrainian bride at their marriage in Dharamsala.

Sergei Novikov, a Russian now an Israeli citizen, married Elona Bramoka, a Ukraine girl, at Divya Ashram in Dharamsala on August 2. The marriage created a sensation on social media as Russia and Ukraine are at war these days.

The marriage was solemnised with Hindu rituals. The couple was happy that locals participated and danced in the ceremony. Kangri Dham, the traditional food of Kangra, was cooked and served to the guests. The couple was known to each other and decided to marry.

The couple is staying in Dharamkot that was also known as little Israel. There is a Chabad house in Dharamkot where many Israeli couples come and get married. The marriage was hit on social media as the native countries of the couple were at war with each other.