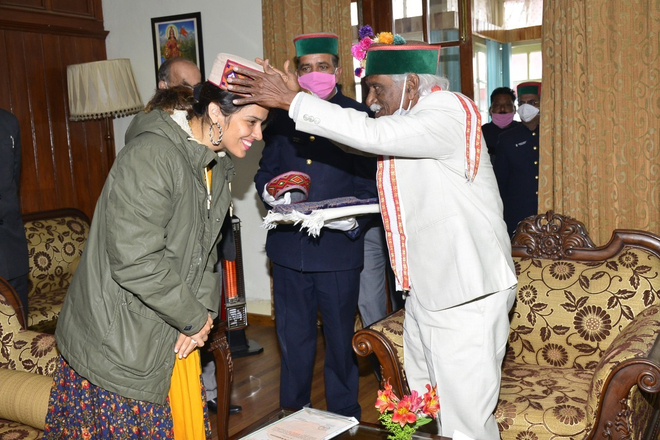 International badminton player Saina Nehwal, along with her husband Arjuna awardee Parupalli Kashyap, called on Governor Bandaru Dattatreya here today. As per the tradition, they were honoured with a Himachali cap, shawl and the picture of Raj Bhavan as a memento.

On the occasion, the Governor said the youth of the state was very talented and possessed qualities of good players. However, many a time they did not get proper platform due to lack of facilities.

He said many players from Himachal were doing well internationally, but this number should be increased.

Dattatreya said with the help of international players such as Saina Nehwal, the possibilities for more sports infrastructure in Himachal Pradesh could be explored.

Saina thanked the Governor and said she was keen on opening a badminton academy in Himachal Pradesh. She said players from North India had to go to Hyderabad and Bangalore for coaching and such initiative would ensure international-level coaching in North India itself.

She said most players were doing well at the national level, but often lagged behind at the international level.

Parupalli Kashyap said many players were forced to visit abroad for training at high altitude, whereas this could be done in Himachal also.