Says no relaxation in two and a half storey limit in Shimla; Govt in a fix 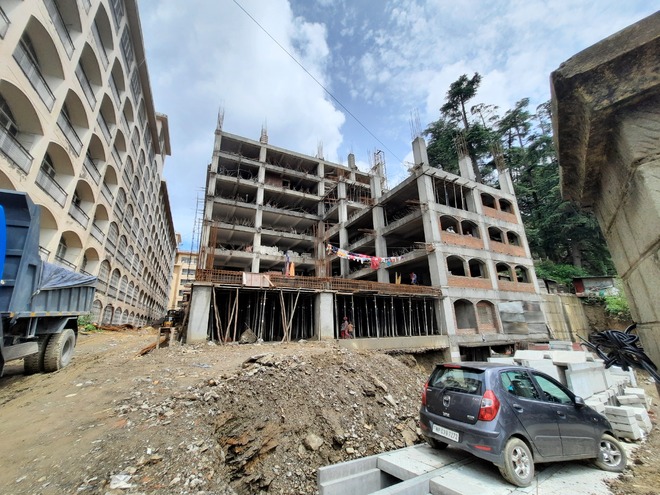 The new building under construction in Chotta Shimla.

The NGT has turned down the request of the Himachal Government to allow installation of a lift and some other construction activities in the heritage Ellerslie building, housing the state secretariat.

With the NGT turning down this plea, the state government is now in a fix as many of these works, including the installation of the lift, are at an advanced stage of construction. What is even more significant is that the green bench has not just turned down the government plea but has reiterated its resolve to not allow more than two and a half storey construction in the state capital and suburbs.

The NGT also directed that the Shimla Development Plan be finalised within three months in accordance with law. Disposing of the government plea, the court came down heavily on the failure of the authorities concerned to regulate construction. “Even if a part of the project is held to be public utility in that garb the main project is of commercial nature and goes up to three stories above the hill level. We, thus, do not find it appropriate to entertain the applications to review/modify the earlier order of this tribunal,” the court observed.

The government had sought permission for installation of a lift, remodelling of roof, ramp for physically challenged persons in Ellerslie Main building, visitors waiting hall for Chief Minister office, extension of car parking at Armsdale building at Secretariat, multi-storey parking and office accommodation as part of Phase III, which has been turned down.

The order has come as a major setback to the state government which was hoping to get some relief for house owners, many of whom have raised more than 25,000 unauthorised constructions in violations of the Town and Country Planning (TCP) norms. “We hereby prohibit new construction of any kind, i.e. residential, institutional and commercial to be permitted henceforth in any part of the Core and Green/Forest area as defined under the various notifications issued under the Interim Development Plan,” the court said.

“Beyond the Core, Green/Forest area and the areas falling under the authorities of the Shimla Planning Area, the construction may be permitted strictly in accordance with the provisions of the TCP Act, development plan and the municipal laws in force. Even in these areas, construction will not be permitted beyond two storeys plus attic floor,” the NGT order read.