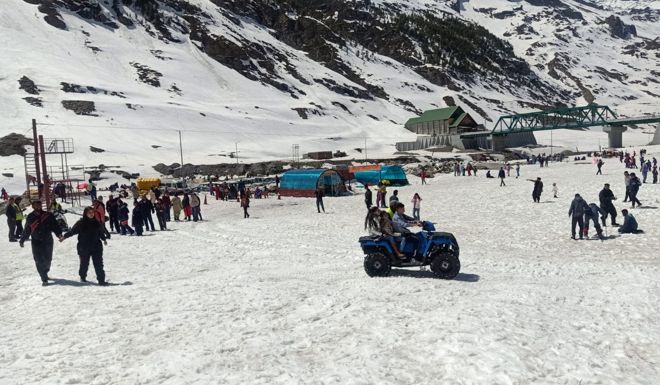 Residents of the Lahaul valley have urged the district administration and the state government to provide public toilets for tourists at the Atal Tunnel and Sissu village on the Manali-Leh highway.

After the opening of the Atal Tunnel, the tourist influx in Lahaul and Spiti has increased drastically but the district lacks even basic amenities for the visitors.

The district administration and Sissu panchayat have set up a few mobile toilets at Sissu, which are inadequate. As a result, tourists ease themselves in the open, posing a threat to the ecology of the area.

A large number of tourists visit the Lahaul valley after the opening of the Atal Tunnel. So, there is need to provide basic amenities at all key tourist destinations to keep the Himalayan region neat and clean. — Rigzin Samphel Heyreppa, Resident of lahaul valley

Suman, a former pradhan of Sissu panchayat, says, “We have urged the government and the district administration to set up public toilets but nothing has been done in this regard”.

Anuradha Rana, chairperson of the Lahaul and Spiti Zila Parishad, says, “We have taken up the issue with the district administration and the government but in vain”.

“After the opening the Atal Tunnel, Lahaul and Spiti has become a hub of tourists. There is an urgent need to develop basic infrastructure to promote tourism. The district administration has set up barriers under the Special Area Development Authority between the tunnel and Sissu village and charges fee from tourists, which should be used to provide such facilities,” she says.

Lahaul and Spiti DC Neeraj Kumar says, “Seven mobile toilets have been set up at Sissu by private operators, while the Tourism Department has resumed its mobile toilet service for public. We are planning to open toilets near the Atal Tunnel for public use”.