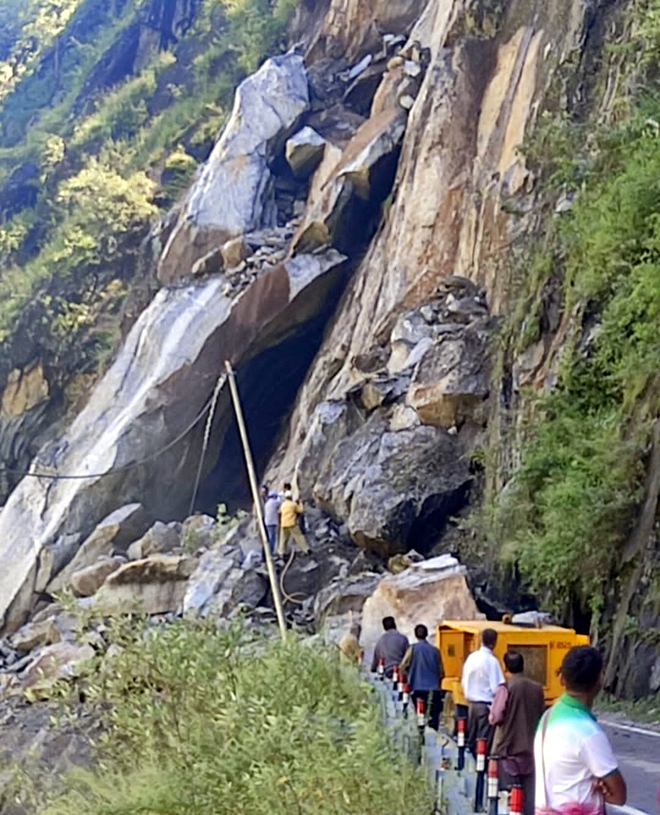 The rock being blasted to clear the Shimla-Kinnaur road at Chaura on Wednesday. Photo: Amit Kanwar

The Shimla-Kinnaur National Highway No. 5 was blocked near Chaura (Kinnaur Gate) late last night following a massive landslide. A large number of vehicles were stranded on both sides of the road as trucks carrying apple from lower areas of Kinnaur were plying on the route. The authorities are facing problems in clearing the road, as machines were unable to clear big rocks.

A huge rock came rolling down and blocked the road completely. Blasting is going on at the site to clear the road, said Deputy Commissioner Abid Hussain Sadiq. He added that the road was expected to be cleared by tonight or tomorrow morning. Fortunately, no casualty was reported as there was no vehicle on the stretch when the landslide occurred around 11.30 pm yesterday.

Meanwhile, six persons, five in Chamba and one in Kullu, have lost their lives in the rain-related incidents in the past 24 hours, taking the toll in the ongoing monsoon season to 397. The state has suffered a loss of Rs 1,017.45 crore and 10 roads are still closed.

The local Meteorological office has issued a yellow warning of a thunderstorm and lightning in the districts of Mandi, Shimla, Una, Chamba, Kangra, Solan and Sirmaur on September 18 and 19.

There was no appreciable change in the minimum and maximum temperatures. Keylong was the coldest at 9.3°C while Una was the hottest at 36.6°C.