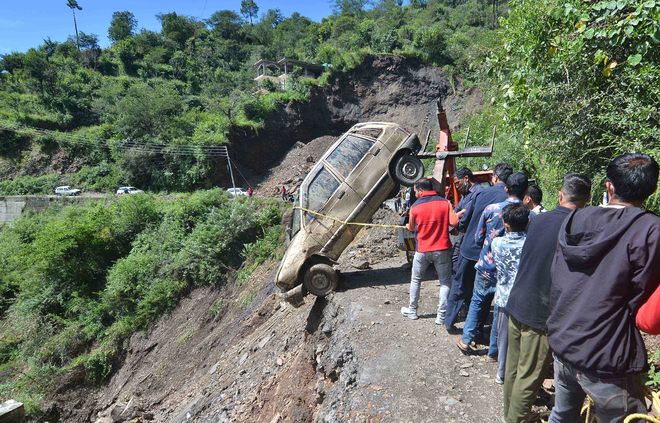 People pull out a car that fell off the road after landslide, following heavy rain in Ghandal, near Shimla on Tuesday. Photo: Amit Kanwar

The Shimla-Mandi National Highway was blocked near the Judicial Academy, Ghandal, about 20 km from here, following a massive landslide late last night. A car with five occupants was damaged but all passengers escaped unhurt.

The 50-metre stretch caved in due to heavy rain and the traffic coming from Mandi has been diverted via the Bangora-Nalhatti-Ghanahatti road while the traffic from Shimla diverted from Ghanahatti on the Kobagh-Kalihatti road, said Deputy Commissioner Aditya Negi.

Officers have been directed to start the restoration work and efforts are being made to clear the road at the earliest, he added.

Meanwhile, residents of Ghandal village said cracks had been visible on the road for the past three months, but the PWD and the NHAI authorities did not pay any heed and the contractor covered it with mud.

The villagers requested the authorities not to cut the hill side to clear the road as houses and gaushala on the top of the hill would be endangered.

Till now, 54 persons have died in landslides in the monsoon season since June 13. The major slides included the one at Nugalsari in Kinnaur district (August 11) in which 28 persons lost their lives, flash floods triggered by landslide, which claimed 10 lives at Boh village in Kangra on July 12 while massive boulders triggered by a landslide hit a vehicle, killing nine persons near Batseri village on the Sangla-Chitkul road in Kinnaur on July 25.

Rain continued to lash parts of Himachal and Pachhad with 71 mm of rain was the wettest followed by Solan 44 mm, Paonta Sahib 38 mm, Sangraha (Sirmaur) 30 mm, Rajgarh 29 mm, Kasauli 25 mm, Kalpa 23 mm, Rohru 22 mm, Shilaroo and Khadrala 21 mm each, Nahan 20, Reckong Peo and Renuka 18 mm each, Shimla 16mm and Kasol 15 mm. The Met office has predicted a wet weather till September 20. There is no appreciable change in the minimum temperature and Keylong recorded 7.3°C. The maximum temperature rose by 2 to 3°C and Una was the hottest with a high of 36.9°C.