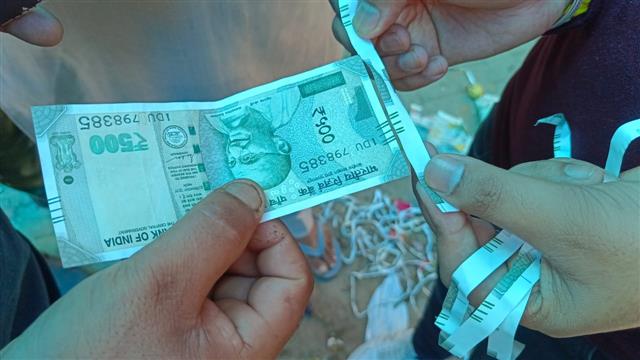 The shredded currency strips have been sent to Junga-based forensic science lab for ascertaining whether they are genuine.

Shredded currency strips of Rs 500, Rs 200 and Rs 100 have been found in the boxes. The police has taken these into custody and a probe was underway to examine various aspects.

The shredded currency strips have been sent to Junga-based forensic science lab for ascertaining whether they are genuine or counterfeit. Since the currency strips were found to be of high quality, their use as packaging material has baffled the police.

While tracing the backward linkages it was found that the fruit boxes were sold at Bhuntar in Kullu district and sent to Chandigarh from where these were further sent to the APMC, Solan. The packaging material was procured from a Bhuntar-based Avtar Bardana Store yesterday. Two types of waste paper weighing 469.30-kg paper were bought from the store.

Virender Sharma, SP Solan, revealed that shredded currency strips have been found in the pomegranate boxes in the APMC measuring several feet. The police has taken these into custody. They have been sent to forensic science lab for ascertaining whether they were genuine or counterfeit. A team would be sent to Bhuntar to ascertain its genesis.

It was being assumed that counterfeit currency could have been shredded in a bid to destroy it. Whether it was shredded at Bhuntar or had arrived there from elsewhere was also being probed.