Results in a majority of the wards declared till evening 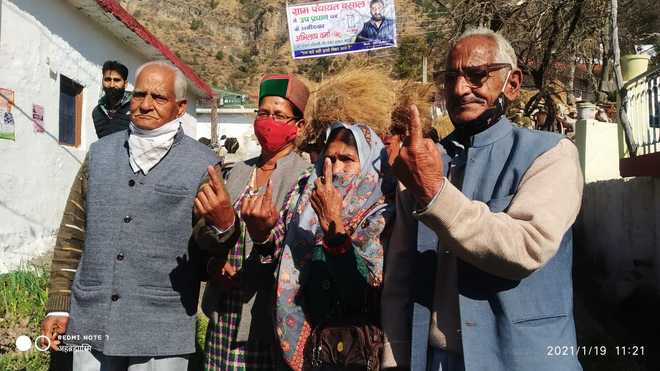 In the Dharampur panchayat samiti those who won the polls include Amar Lal from Badhalag, Asha Kumari from Goyla, Jamuna Devi from Darwa, Sunil Thakur from Jalda, Shivani from Kishengarh and Kamlesh Thakur from Jagjitnagar.

The winners of Kunihar panchayat samiti were Devinder Tanwar from Kothi, Deepika from Gagnaghughat, Gita Devi from Kotli, Sunita from Palog, Manish Kumar from Sevdha Chandi, Bhawna from Devra and Pratap Singh from Domehar.

Those who won the Kandaghat panchayat samiti polls were Chandu Ram from Chawsa, Praveen Kumar from Tundal, Satya Devi from Chail, Vijay Thakur from Bisha, Radha from Banjni, Aanchal from Dangheel, Kunta devi from Qwarag, Punit Shandil from Sirinagar, Chanchla from Kot, Sushma from Delgi and Manish Thakur from Hinner.

In the Solan panchayat samiti those who won include Amar Singh from Jabal Jamrot, Neha Kashyap from Salogra, Sushil Kumar from Jadli, Laxmi Dutt from Jaunaji, Devinder Kumar from Shadiyana, Kali Ram from Shamrod, Bhanu Sharma from Deothi, Anita from Solan and Lalita from Saproon.

In Nalagarh the winners were Surjit Kaur from Gholowal, Dataram from Bagheri, Ravinder Singh from Mastanpur, Hardeep Kumar from Jogo, Rina Devi from Nand, Jai Krishan from Ratwari, Nand Lal from Dharmana, Ramesh Kumar from Lag and Yogesh Sharma from Saur ward. — TNS