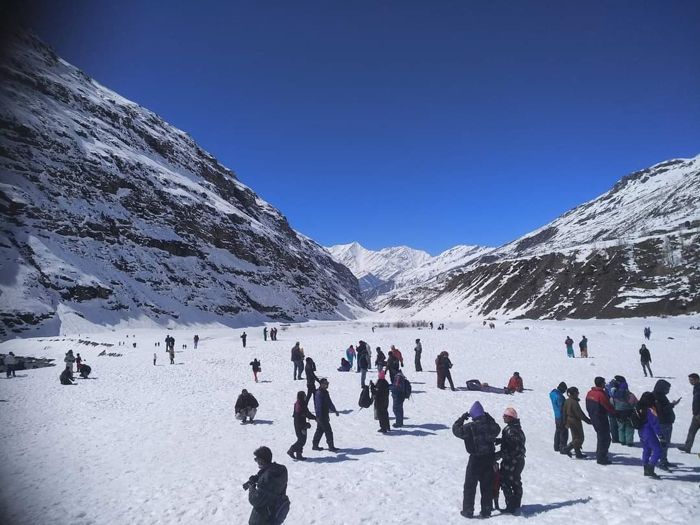 Tourists frolicking in the snow at Sissu in Lahaul on Sunday.

The Lahaul and Spiti district administration is planning to set up toilets equipped with a solar energy system that will be functional even during the winter at Sissu near the Atal Tunnel and on the premises of Triloknath temple, says Deputy Commissioner Neeraj Kumar.

He says that this would be the one of the kind facility in India, where solar energy will be used to check the freezing of water during cold weather.

To check freezing of water

It will be the one of a kind toilet facility in India where solar energy will be used to avoid freezing of water during cold weather.— Neeraj Kumar, DC, Lahaul & Spiti

“As the winter in Lahaul and Spiti is very harsh, with temperature plummeting to as low as -25°C, providing toilet facility to tourists November onwards is a big challenge. The water freezes, making it impossible to operate pour-flush toilets. On the other hand, dry toilets are not acceptable to tourists from other parts of the country,” he adds.

Neeraj says, “After the opening of the Atal Tunnel on the Manali-Leh highway, the tourist influx has increased manifold. Residents have been requesting the district administration to find a solution to the problem”.

“Dr Anil Kishan, Assistant Professor, IIT Mandi, has done a field survey to chalk out requirements for establishing two toilet units on a pilot basis. One will be established close to the Sissu helipad and another at the Triloknath temple. If this model is successful, it will be replicated at all major tourist destinations in the district. The district administration will bear the cost of the project from funds allocated under the Swachh Bharat Mission Gramin,” he adds.