SPCB slammed for inaction on water pollution in Baddi : The Tribune India

SPCB slammed for inaction on water pollution in Baddi 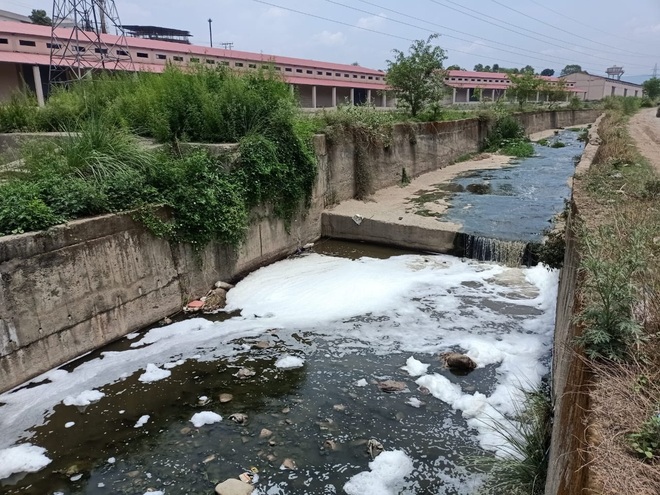 Violations of water pollution are continuing in Baddi and mere stay of order of closure and assessment of compensation for the past violations does not justify inaction for further violations.

Coming down heavily on the State Pollution Control Board (SPCB) for lack of action on violators of water pollution, the Principal Bench of the National Green Tribunal made this observation on June 23 in a case pertaining to pollution in Balad river on account of leakage from the Common Effluent Treatment Plant (CETP).

“Merely keeping an eye on units discharging more than 200 kilo litres per day (KLD) effluents is not enough and violations by those discharging less than 200 KLD effluents is no less serious or less harmful for the environment and public health,” observed the Tribunal.

A four-member joint committee comprising a representative of Ministry of Environment, Forest and Climate Change, Central Pollution Control Board, SPCB and District Magistrate has been directed to file a status report of compliance after inspecting the erring units.

The NGT has expressed serious concern over the fact that the four textile units of Baddi are still not meeting the water pollution norms and the fixed dissolved solids (FDS) released by them were beyond the prescribed limits.

These units - Auro Textile, Auro Textile unit-II, Auro Dyeing of Vardhman Textile and Winsome Textile - were yet to install advance treatment systems for treating the FDS which was a category-IV effluent comprising concentrated dyes.

The pipeline carrying these effluents was found non-functional and choked as they carried concentrated effluents from these units to the CETP for treatment. Not only this, a major portion of this effluent got mixed with category 1 effluent and could not be treated appropriately in the plant.

Further, as per an interim report submitted by the SPCB on May 6, the level of fixed dissolved solids (FDS) in the CETP was found to be 2364 mg/litre which was not within the prescribed limits. This was, however, reduced in two subsequent samplings thus showing improvement.

The SPCB had identified 16 industries having effluent generation of more than 200 KLD. In the latest sampling conducted on May 21, three such industries -Proctor & Gamble Home Products, Torrent Pharmaceutical and Abbott Healthcare - were, however, were found having effluents above the prescribed limits for which they were issued notices by the SPCB on June 16. The samples of other units were found within the prescribed limits.

The NGT has directed the SPCB to take remedial action to enforce environmental rule of law.