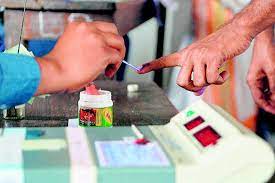 As many as 3,047 visually impaired voters will be able to exercise their right to vote in the byelections of Mandi parliamentary constituency and Fatehpur, Arki and Jubbal-Kotkhai Assembly constituencies, said state Chief Electoral Officer C Palrasu here today.

As many as 329 such voters have been identified for the byelections in three Assembly constituencies — 125 in Arki, 129 in Jubbal-Kotkhai and 75 in Fatehpur.

He said for the convenience of these voters, Braille signage (identity indicator) feature had been added with the Electronic Voting Machines (EVMs) by the Election Commission of India. With the availability of this facility, these voters will be able to exercise their right to vote on their own.

He said ballot paper sheets written in Braille would also be available in every polling station. He said instructions had been issued to all District Election Officers to make necessary arrangements in this regard well in time.